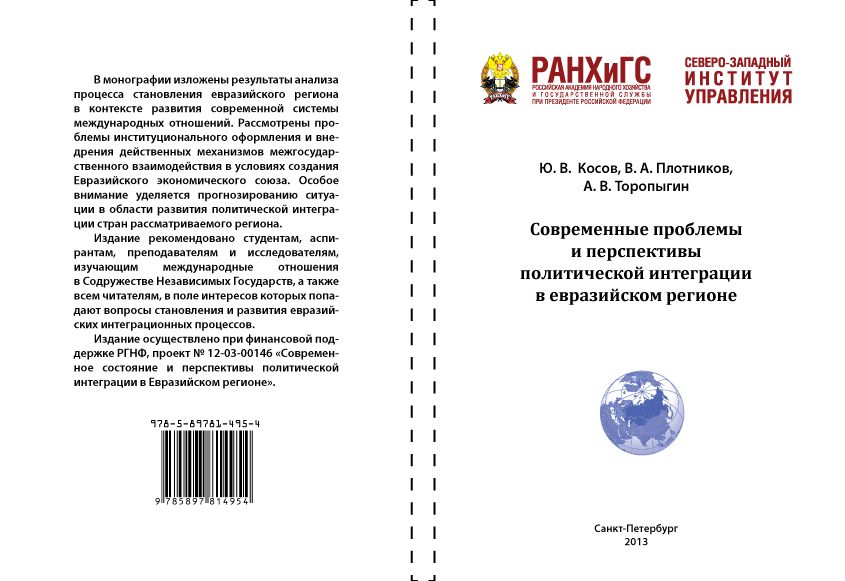 Similar publications
The Eurasian Economic Union: An EU-Like Legal Order in the Post-Soviet Space?
Karliuk M. Law. LAW. Высшая школа экономики, 2015. No. WP BRP 53/LAW/2015.
The Eurasian Economic Union (EAEU) is an emerging regional organization of economic integration in the post-Soviet space. Following the limited success of previous integration attempts, it seeks to pursue deeper integration, borrowing features from the EU. The EAEU possesses a complex system of elements of an emerging legal order, some of which have distinct similarities with the EU, but others are decisively different. This paper analyses these features in order to find whether the legal changes that accompany the creation of the new entity allow ensuring the effective functioning of the EAEU and whether the respective legal order is autonomous similar to that of the EU. The author argues that the EAEU lags behind the EU in terms of the autonomy of the legal order and in its ability to ensure the effective functioning of the organization. Supranational features are limited, while it relies predominantly on intergovernmental elements with a view to preserve the interests of all Member States.
Наднациональное регулирование и развитие системы источников финансового права Российской Федерации
Козырин А. Н. Налоги и финансы. 2013. № 2. С. 6-13.
Customs payments play special role in the economy of Russian Federation. They have composed just over 50 percent to total budgetary income on the eve of the Russian Federation entry into the EurAsEC Customs Union. The article considers the changes occurred in the legal base of customs regulation since the EurAsEC Customs Union has been created and Russian Federation has become its member. The customs legislation structure of the Customs Union has been analyzed in the article. Special attention was given to the acts which become the source of financial law in Russian Federation, being adopted by supra-national regulator that is the Eurasian Economic Commission.
Вводная статья. Миграция в постсоветских странах
Карачурина Л. Б. В кн.: Миграция в России. 2000-2012. Хрестоматия в 3 томах. Т. 1. Ч. 1. М.: Спецкнига, 2013. С. 451-468.

Евразийская экономическая интеграция: потенциал и ресурсы развития
Максимцев И. СПб.: Издательство СПбГЭУ, 2017.
The collection of articles represents the results of researches on the most relevant issues of Eurasian economic integration held by young researchers of Russia, Belarus, Kazakhstan, Armenia, Kyrgyzstan and Ukraine. The articles reflect the problems of monetary and financial integration of the Eurasian Economic Union (EAEU) member countries, issuies of the integrated electronic market formation and regional value chains development in different industries. Special attention is paid to various aspects of social integration.   The materials might become an advantage to PhD students and young scientists, to people getting bachelor and master degrees in economics when preparing reports, writing essays and other papers as well as to lecturers and practitioners and a wide range of readers interested in economic aspects of Eurasian integration.
Migration in Post-Soviet Countries
Karachurina L. B. In bk.: Migration in Russia. 2000-2013. M.: Spetskniga, 2013. P. 125-148.

In article results of preliminary forecasting of social and economic consequences of creation of the customs union with participation of the Russian Federation, Byelorussia and Republic Kazakhstan by means of computer economic-mathematical model of the general balance Global trade analysis project (GTAP) are resulted.

The recent crisis in Ukraine cast a spotlight on those countries located between Russia and the EU, a region that had long existed beneath the radar of international politics. Indeed, even its name remains indeterminate: the term 'post-Soviet' is too encompassing (it could also designate Estonia or Tajikistan) while the notion of 'Eastern Europe' has long lost any geographical anchor. Instead, this space is often named after regional powers’ attempts to shape it: as the EU’s 'Eastern Neighbourhood' or as Russia’s 'Near Abroad'. The new region-building endeavour pursued by Russia through Eurasian integration frameworks is a crucial development in this regard.

On the 29 of May 2014, Russia, Belarus and Kazakhstan signed the Treaty establishing the Eurasian Economic Union (EEU), which extends the provisions of the existing Eurasian Customs Union (ECU) and comes into being in 2015. This integration regime has been lauded by Russian President Vladimir Putin as a new, better version of the European Union, and castigated by US Secretary of State Hilary Clinton as a new form of the Soviet Union. This report shows that it is neither. The EEU is a modern and far-reaching attempt at economic integration, but one that is weakened by internal and conceptual contradictions. What was designed as a geo-economic framework is increasingly becoming a geopolitical issue. In attempting to counter the influence of the EU’s alternative integration regime (the Eastern Partnership), Russia has shifted its diplomacy from persuasion to coercion, and Moscow is increasingly resorting to using the EEU as a foreign policy tool. The countries of the entredeux – literally, something placed between two things – are being forced to face to a geopolitical choice they had been trying to avoid, or at least to defuse. Divisive domestic politics, separatism, structural dependencies and the economic and political calculations of internal actors are key factors mediating and complicating their choice. This report focuses on these issues that are too often overlooked in the debate on Russia-EU regional competition.

The paper studies the impact of the global financial crisis on the development of integration processes of the CIS countries. The appearance of certain structural economic turbulence in the post-Soviet space has been proved by calculating rank concordance coefficients for changes of six basic macroeconomic indicators in 2009. It is shown that these changes are short-term and will hardly affect the vector of integration processes in the long term. Some ways to accelerate the integration process through the development of a coherent economic policy after the crisis are discussed.