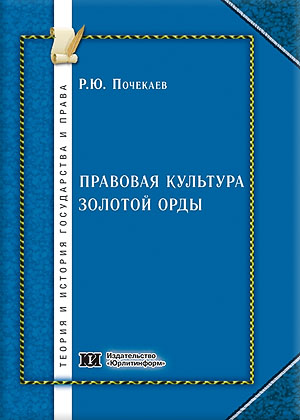 Культурно-историческая специфика формирования швейцарской государственности
Соломонова С. А. В кн.: Правовые культуры. Жидковские чтения: Материалы Всероссийской научной конференции. Москва, 25 марта 2011 г.. М.: Издательство РУДН, 2012. С. 356-361.
Соотношение профессиональной и иноязычной коммуникативной компетентности в процессе обучения иностранному языку в сфере юриспруденции
Дементьева Т. М. Вестник Вятского государственного гуманитарного университета. Серия: Педагогика и психология. 2012. № 4(3). С. 14-19.
Political And Legal Views Of Mikhail Speranskiy In “Rules On The Siberian Kirghiz”
Pochekaev R. Y. Law. LAW. Высшая школа экономики, 2014. No. 43.
Mikhail Speranskiy, outstanding Russian statesman and legislator of the first half of the 19th century was the Siberian Governor-General from 1819-1821. The main result of this stage in his career was the reform of government in Asiatic Russia as well as development in 1822 of a set of codes – rules and regulations – for Siberia and its peoples. Speranskiy tried to incorporate his theoretical views on the state and law into these codifications. One of them were the “Rules on the Siberian Kirghiz” which provided reforms of the government system of Kazakhs (“Kirghiz” in the Russian pre-revolutionary tradition) of the Middle Horde which were under the control of Siberian regional authorities. The Middle Horde became a place for practical experimentation for Speranskiy’s ideas. Previous researchers have paid more attention to consequences of the promulgation of the “Rules on the Siberian Kirghiz” on the further history of Kazakhstan. This paper clarifies which specific ideas of Speranskiy on the state and law were reflected in the “Rules on the Siberian Kirghiz” and answers the question of whether they had practical importance. A substantial part of the “Rules on the Siberian Kirghiz” was, in fact, ineffective and didn’t use in practice because of lack of knowledge of Speranskiy on Kazakhs and his underestimation of their political and legal level. At the same time, authority of Speranskiy in the Russia of the 19th c. as legislator and reformer was so high that his “Rules on the Siberian Kirghiz” became actual until 1860s when next substantial reforms in Kazakhstan took place.
“Universal” Concept of Human Rights and “African Specifics”
Bondarenko D. M. In bk.: African Studies in Russia. Works of the Institute for African Studies of the Russian Academy of Sciences. Yearbook 2010–2013. M.: 2014. P. 75-80.

Институт религиозного наставничества в современном шиитском мире
М.: Центр стратегической конъюнктуры, 2015.
Золотоордынское наследие. Материалы Международной научной конференции «Политическая и социально-экономическая история Золотой Орды (XIII–XV вв.)». 17 марта 2009 г. Сб. статей
Edited by: И. М. Миргалеев Вып. 1. Каз.: Издательство «Фэн» Академии наук Республики Татарстан, 2011.
The Legitimacy of the Bolshevik Order, 1917-1918: Language Usage in Revolutionary Russian Law
Borisova T. Y. Law. LAW. Высшая школа экономики, 2012. No. 05.
The article describes and analyzes the legislative politics of revolutionary regimes in Russia in 1917-1918. The author aims to demonstrate the political meaning of the form of early Soviet legislation and its legitimizing effect. The revolutionary legislators often used specific language in the new laws as a vehicle of legitimacy, i.e. to make the people comply. The two main types of legal language used by the Bolsheviks can be interpreted from the perspective of different types of legitimacy. The revolutionary strategy used propagandistic legislation, written in the language of lay people, which urged them to act according to the new law. It can be seen as a request for acts of the people to legitimize the soviets. On the contrary, the traditional strategy employed old bureaucratic means of writing and distributing legislation to the local soviets. The language used by this strategy was closed to the understanding of a lay audience and implied traditions of obeying the law written in familiar legal language, which in turn implied rational/legal legitimacy. The second strategy had already become dominant after the first months of the Bolshevik revolution. This observation demonstrates that from the very beginning of their rule, Soviet leaders approached legislative policy from a technocratic point of view, which determined the further development of Soviet legal theory and practice.
Актуальные проблемы истории и права
Edited by: В. А. Лабузов Оренбург: Оренбургский государственный институт менеджмента, 2011.
Правовое обеспечение единой государственной экологической политики Российской Федерации
Edited by: С. А. Боголюбов, Н. И. Хлуденева М.: Юстицинформ, 2011.
Право на контрдемонстрации: угроза или индикатор уровня демократии?
Храмова Т. М. Конституционное и муниципальное право. 2012. № 7. С. 10-16.