This volume includes most papers read at the International Conference on "Meter, Rhythm and Performance" held at the University of Vechta, Germany, in May 1999. This metrics conference set out to break new ground in two respects. It was the first to explicitly address aspects of the performance of poetry in addition to questions of meter and rhythm.It was also the first of its kind to invite (and actually attract) a truly international panel of scholars from competing metrical traditions such as Generative Metrics,the Russian School of Metrics, Cognitive Metrics, and several others. Thus,the articles present an unusually broad picture of current research in the field of metrics,including a section on free verse. The languages and literatures addressed include Irish, Welsh, Breton, Latin, English (British and American), Dutch, German, Russian, Slovene, Serbo-Croatian, and Sanskrit. Most of the articles are written in English, eight are in German.

The article use of statistics in linguistic analysis of German Verse. 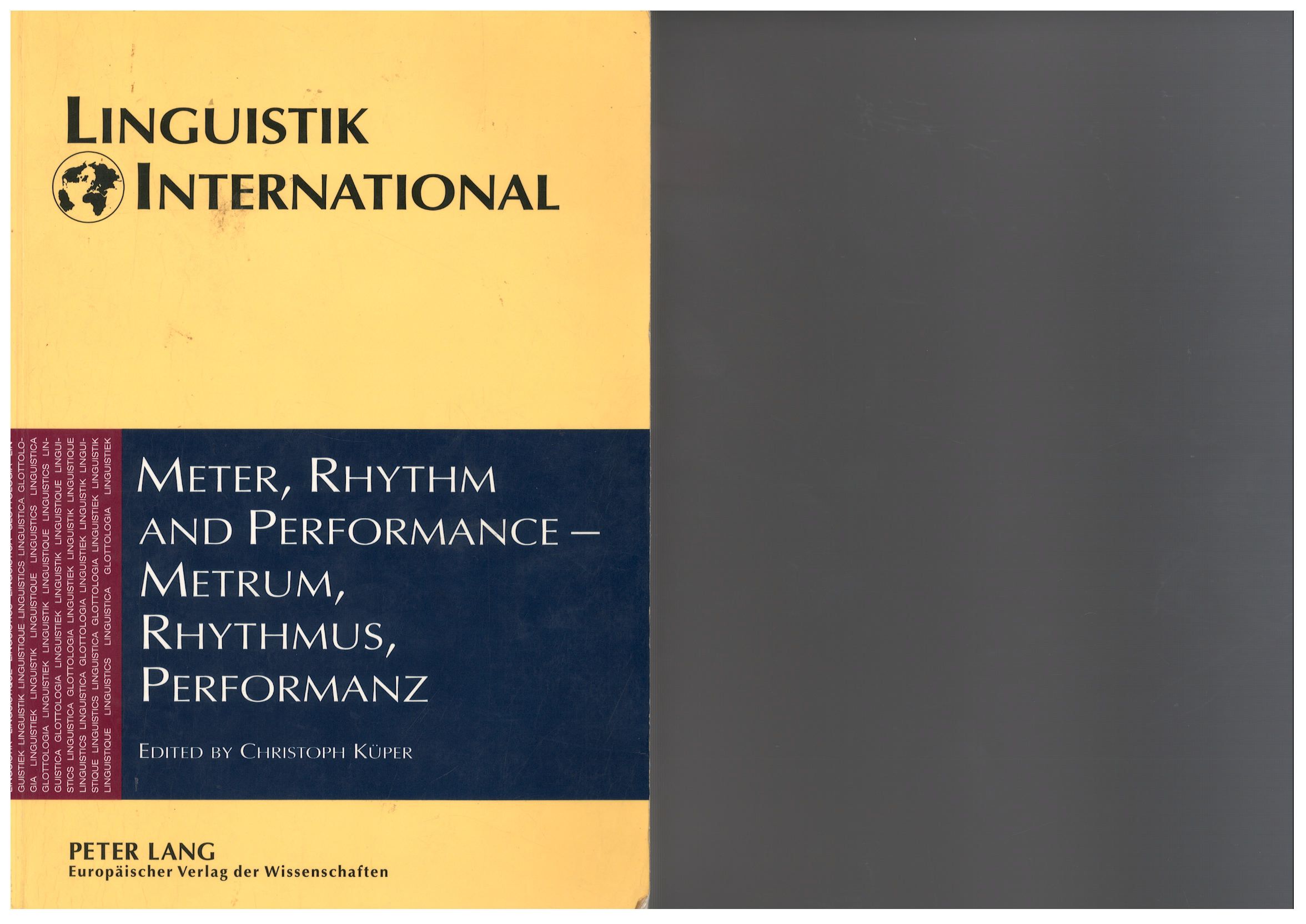 The article use of statistics in linguistic analysis of German Verse.

In 2001 and 2006 St.Peterburg University Press published two volumes of scholarly articles titled Formal Methods in Linguistic I and II. If the first collection was basically dedicated to problems of Slavic verse, then the second also contained articles on West European versification. In addition, the first collection was in Russian, while the second was a bi-lingual, English-Russian volume.

This article is about the Rhythm of Mikhail V.Lomonosov's Odes of 1743.

Research Teams’ Human Capital
Shmatko N. A. Science, Technology and Innovation. WP BRP. Высшая школа экономики, 2014. No. WP BRP 32/STI/2014 .
Adopting a Bourdieusian perspective, human capital of research team in the paper is understood as the configuration of the active properties of individual team’s members and the distribution of differences of their active properties. The paper describes a research team as an ensemble of social distinctions determined by a distribution of “active properties” of the team members (educational, research, administrative and media characteristics) and analyses their empirical distribution. The study is based on the consideration of sociological factors of research teams’ performance. The paper discusses in depth the performance of research team (from a sociological point of view) and the relationship between the performance and the social management efficiency. It is prouved that the performance depends on the efficiency of human capital management research team. These distributions show how holistic properties of the field develop, how they relate to individual agents’ properties and how individual researchers “fit” into science.
Эффективность олимпиадной системы набора абитуриентов в вузы (на примере химических вузов)
Гордеева Т. О., Осин Е. Н., Кузьменко Н. Е. и др. Журнал общей химии. 2011. Т. LV. № 5-6. С. 68-76.
Going Public: Empirical Study of Motives and Efficiency of IPO in CIS
Ivashkovskaya I., Ponomareva O. Journal of Corporate Finance Research. 2008. Т. 2. № 4. С. 5-22.
Методическое пособие по математической физиологии. Количественная оценка потребления кислорода человеком при физической работе. Часть 5
Иванов А. И., Исаков И., Демин А. В. и др. Ч. 5. М.: Слово, 2012.
Performance-Based Typology Of Universities: Evidence From Russia
Abankina I., Aleskerov F. T., Belousova V. et al. Science, Technology and Innovation. WP BRP. Высшая школа экономики, 2015. No. WP BRP 33/STI/2015.
In recent decades, increased economic pressure and growing societal expectations have led to the introduction of performance-based funding models of public research, namely universities. In this respect, universities have started to use various strategies to adapt and develop their activities under the new framework. National governments are currently attempting to design and apply various taxonomies for structuring university infrastructure in different ways in order to facilitate the development of efficient programmes for the advancement of higher education. This paper provides a review of different approaches to university typologies, discusses the choice of indicators and mathematical tools for grouping universities using common criteria and evaluating their performance based on classical and modified DEA approaches. The authors develop a typology which was tested in the Russian context, taking into account indicators of research and educational activities implemented by domestic universities and their efficiency score. The typology is based on clustering universities by the availability of resources and research and educational performance and the combination of these results with their efficiency score. It groups universities by type and includes a decision tree for classifying them taking into account their heterogeneity. It serves as a basis for the content analysis of a wide range of universities, and for shaping targeted policies aimed at particular groups.
Proceedings of the Seventh conference on International Language Resources and Evaluation (LREC'10), Valletta, Malta, 17-23 May 2010
Valletta: ELRA, 2010.
Технологии работы с текстовой и фактографической информацией. Словарь-справочник
Шаров А. Г. МегаВерсия, 2007
Boris Pasternak: Russian Writer in Italy
Galatenko Y. N. Academic Journal of Interdisciplinary Studies. 2013. Vol. 2. No. 9. P. 304-309.