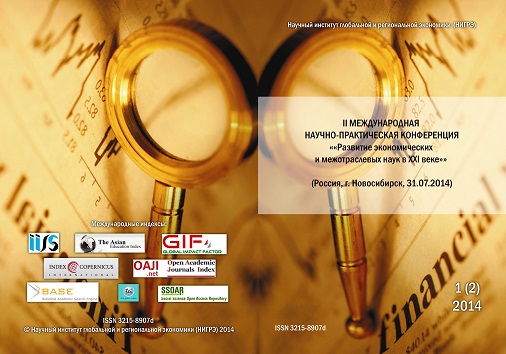 Expertics (general theory of expertise)
Nesterov A. Law. LAW. Высшая школа экономики, 2012. No. 06.
This paper considers the main theoretical, regulatory, and practical problems of expertics. It describes a new scientific direction in the field of juridical sciences, specifically in the study of the legal and juridical attributes of expertise and expert activity. Expertics is defined to be a combination of science, practice, and scholarly study. The necessity of studying expertics pertains not only to lawyers, but also to lay individuals whose work concerns various institutions of expertise.
Принудительные меры медицинского характера
Ковтун Н. Н. В кн.: Комментарий к Уголовному кодексу Российской Федерации. М.: Юрайт, 2009. Гл. Раздел VI. Глава 15. С. 97-104.
The Academic Study In The 1990s And 2000s Of The History And Practice Of Awarding Academic Degrees And Titles In Russia
Ilina K. A. Humanities. HUM. Basic Research Programme, 2014. No. WP BRP 46/HUM/2014.
This article reconstructs the activity of the 'Alexander Yakushev school', a scholarly movement whose representatives over the last 20 years have studied the history of awarding academic degrees in the Russian Empire, the USSR and the Russian Federation. The causes of this school's emergence, its research areas are analyzed, and its achievements are evaluated. The article also assesses the reform plan for the thesis review procedure which Yakushev suggested after the Higher Attestation Commission (VAK) refused to confirm the higher doctorate in law he had been awarded.
Ограничение вмешательства государства в экономическую деятельность субъектов предпринимательства
Глушко Е. К. В кн.: Судьбы конституционализма в России и современном мире. Вып. 7. М.: Юрист, 2012. С. 175-200.
Состояние системы государственного контроля в Российской Федерации: Аналитический доклад - 2011
Плаксин С. М., Кнутов А. В., Чаплинский А. В. и др. М.: МАКС Пресс, 2011.

Север – Юг – Россия 2011. Ежегодник
Edited by: В. Хорос, Д. Б. Малышева М.: ИМЭМО РАН, 2012.
The Republic of Armenia 2010: Previous experiences – Future Prospects
Тегеран: Институт изучения Кавказа, 2012.
This is the collection of articles devoted to the research of the Armenian Republic in different aspects. These reports were presented on the conference “The Republic of Armenia 2010: Previous Experiences – Future Prospects” in 2010 in Tehran.
Модернизация России: условия, предпосылки, шансы. Сборник статей и материалов. Выпуск 1
Иноземцев В. Л., Красильщиков В. А., Медовников Д. С. и др. Вып. 1. М.: Центр исследований постиндустриального общества, 2009.
Russia in the System of the European Environmental Governance of the Baltic Sea Area
Nechiporuk D., Belokurova E., Nozhenko M. Working Papers of Centre for German and European Studies. Centre for German and European Studies, 2011. No. 10.
The paper describes some results of the international project “Improving Societal Conditions for the Baltic Sea Protection” (PROBALT) conducted by the international team of scholars from Finland, Germany and Russia in 2009-2011 in the framework of the broader BONUS+ programme. The project rested on the assumptions that the relatively unsuccessful actions aimed to protect the Baltic Sea cannot be explained only by lack of scientific knowledge of the existing ecological problems. Here, an important role is played by the sociocultural factors that influence the course of environmental policy at different levels: supranational, national and subnational. Special attention was drawn to the problem of eutrophication or enrichment of water bodies with the so called biogenic substances (phosphates, nitrogen, etc), which leads to massive algae bloom and lack of oxygen for marine organisms. Therefore, the principal aim of the research was to define the societal conditions for the protection of the Baltic Sea in the cases of the EU and some coastal countries like Finland, Sweden, Germany, Poland, Lithuania, Latvia, Estonia and Russia. But in this Working Paper only the results of the research on the Russian case are presented.
Political Geography and Foreign Direct Investment
Betschinger M. Исследования по экономике и финансам. WP9. Высшая школа экономики, 2012. No. 2,4.
.