During the early 2000s the market liberalization reforms to the Russian economy, begun in the 1990s, were consolidated, but since the mid 2000s economic policy has moved into a new phase, characterized by more state intervention with less efficiency and more structural problems. Corruption, weak competitiveness, heavy dependency on energy exports, an unbalanced labour market, and unequal regional development are trends that have arisen and which, this book argues, will worsen unless the government changes direction. The book provides an in-depth analysis of the current Russian economic system, highlighting especially structural and institutional defects, and areas where political considerations are causing distortions, and puts forward proposals on how the present situation could be remedied.

Chapters
Between Light and Shadow: Informality in the Russian Labour Market
Gimpelson V. E., Kapeliushnikov R., , in : The Challenges for Russia's Politicized Economic System. : Оксфорд : Routledge, 2015. Ch. 3. P. 33-58.
Economic growth in Russia in the first decade of this century almost doubled the country’s GDP but was accompanied by substantial reallocation of labor to the unregulated sector while formal employment was on gradual decline. The paper overviews evolution of the Russian labour market during the period of 2000-10 and discusses most general implications of ...
State-Business Relations in Russia after 2011: 'New Deal' or Imitation of Changes?
Yakovlev A. A., , in : The Challenges for Russia's Politicized Economic System. : Оксфорд : Routledge, 2015. P. 59-76.
During the early 2000s the market liberalization reforms to the Russian economy, begun in the 1990s, were consolidated. But since the mid 2000s economic policy has moved into a new phase, characterized by more state intervention with less efficiency and more structural problems. Corruption, weak competitiveness, heavy dependency on energy exports, an unbalanced labour market, ...
Chapter 11. Regional inequality and potential for modernization
Zubarevich N., , in : The Challenges for Russia's Politicized Economic System. : Оксфорд : Routledge, 2015. P. 182-201.
Russian Regional Resilience: Cooperation and Resource Abundance: A Case Study of Khanty-Mansi Autonomous Okrug
Leonard C. S., Ilina I. N., Evgeniy Plisetskiy, , in : The Challenges for Russia's Politicized Economic System. : Оксфорд : Routledge, 2015. P. 220-238.
Persistently among the leading regions of the country since the 1990s, Khanty-Mansiysk Autonomous Okrug, like most of Russia’s resource abundant regions, was resilient in the aftermath of the global financial crisis, despite its exposure to international capital flows. In such resource abundant regions, long-run efficient and cooperative budget planning and performance largely account for their ...
Research target: Economics and Management
Priority areas: economics state and public administration
Language: Russian
Text on another site
Keywords: региональная политикароссийская экономикаRussian economyregional developmentmarket liberalization reformsRussian economic system 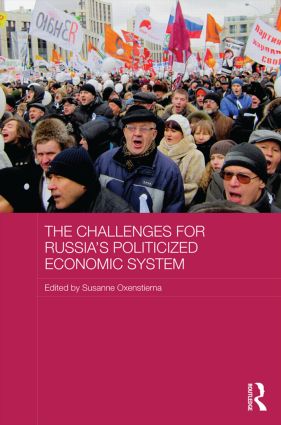