Chapter is devoted to the peculiarities of dialogical Tolstoy's ideas, which was discussed in his philosophical and literary texts of the late period. Particular attention is paid to the specifics of dialogues in "Hadgi Murat" 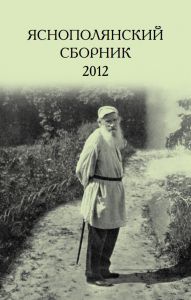 Collection is published conclusions of Tolstovedov.

Leo Tolstoy and Max Weber on value neutrality of university research The problem of value neutrality of science is considered on the basis of works by Leo Tolstoy and Max Weber. In the first part of the article, the statements on the value neutrality of scientific knowledge and university teaching by Weber and Tolstoy are made explicit and analyzed in a comparative perspective. In the second part, the central problem of Tolstoy and Weber, that is, a rational choice of the value paradigm, is studied systematically. Differences in their assumptions and conclusions are shown. In the third part, a historical commentary to the context of Tolstoys and Webers works is given. The works are treated as episodes in a wider modern history of the value neutralization of the scientific knowledge and university teaching. The specifics of this process are tightly connected with the fundamental principles of the modern research university (the Humboldtian model of university).

The article deals with F. Kafka’s attitude to the First World War, reflected in his letters, diaries and prose.

The response of Leo Tolstoy to the First Russian Revolution highlighted new aspects of his teaching, which had long occupied an important place in Russian debates about the most important. He himself began his own personal uprising against the government back in the 70s, and his sermon of non-violence managed to acquire polemical works, arrays of pros and cons, and even sects, but the revolution showed that everything is not so transparent in his understanding of violence and state and the role of personality in history. There was a mutual reflection of two mirrors - Tolstoy and the Revolution. And this revealed some element that fell in Tolstoy’s previous doctrine: the motive, the invisibility of which led to a simplified reading of Tolstoy’s already deliberately simple teachings, to a suspiciously easy revelation of obvious contradictions and inconsistencies in his writings.

The monograph is focused on Russian intelligentsia self-identification that is considered both in the philosophical and in the cultural perspective. The text consists of two parts. The first one deals with the formation of the intelligentsia, beginning from the 18th century to the present, the problematization of the most important themes and ideas is displayed; the second one reveals a specific intellectual, spiritual, vital opposition of Dostoevsky and Tolstoy to the Russian intelligentsia history, status, and fate. Both writers, while holding diametrically opposite world outlooks, were quite critical towards the intelligentsia’s ways of thinking, its ideology, basic values ​​and behavior patterns.

A special attention is paid to the intelligentsia’s “binary consciousness” that “works” pendulum-like, shifting from some specific values to the opposite ones and back, as well as some of its representatives’ holistic (all-embracing) worldview that is quite contrary to the dialogic one. It is not only reflection exercise, but the value content of intelligentsia’s ideas as well. The ideas within that worldview from time to time change up ground, sometimes up to the quite opposite ones. Dostoevsky reconstructed the negative image of an intelligentsia member and, paradoxically, reproduced the same binary oppositions approach in his own worldview. Tolstoy, in his philosophy and life-faith, tried to return to the culture of interpersonal dialogue and integrity.