The volume contains articles of scientific staff and faculty of the Department of Computer Science and Applied Mathematics and Scientific-Educational Center of computer modeling of unique buildings and complexes of Moscow State University of Civil Engineering (National Research University), devoted to actual problems of applied mathematics and computational mechanics.

Filtering the suspension in porous media is important for long-term assessment of the strength of soil in the construction of underground and hydraulic engineering structures. The geometrical and mechanical model of filtering is considered: solid particles pass freely through the larger pores, and get stuck at the entrance of tiny pores smaller than the diameter of the particles. The asymptotics of the suspended and retained particle concentrations in the suspension is constructed on the assumption of small deposit. 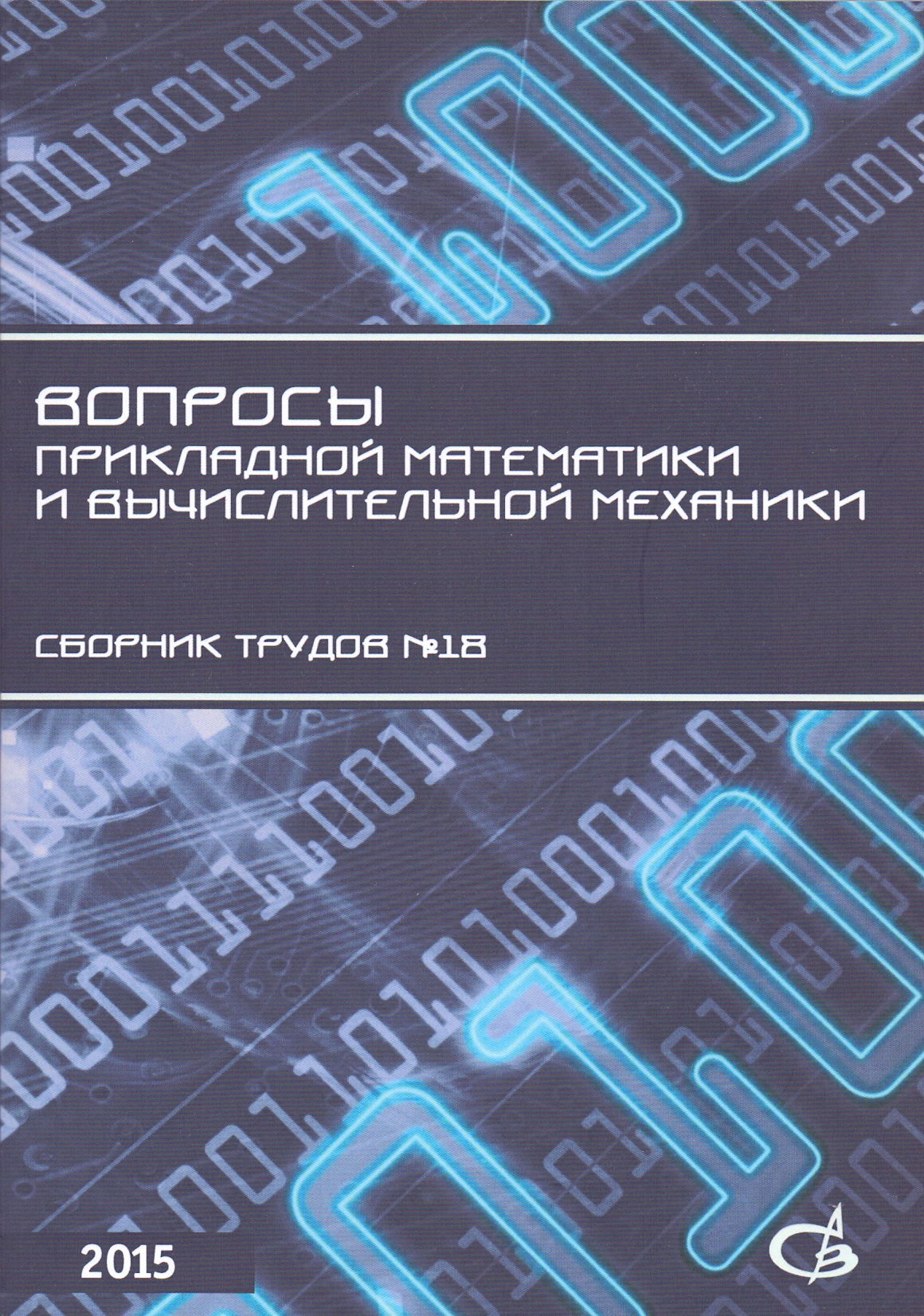 Simulating principles of proposed attribute (A) and object-attribute (OA) architectures of computer systems (CS) that implement the dataflow execution model, and the results of a dataflow-supercomputer system simulation are described. A new formalism of "Attribute Nets" (A-nets) is proposed for mathematical modeling of dataflow-CS that differs significantly from apparatus of Petri Nets. This formalism lays foundation for the OA-programming&simulation environment of a dataflow-CS which is used in development programming and test of the OA-supercomputer system.

The considered model of the failure rate of CMOS VHSIC design proposed in the article Piskun G.A., Alekseev V.F., "Improvement of mathematical models calculating of CMOS VLSIC taking into account features of impact of electrostatic discharge", published in the first issue of the journal "Technologies of electromagnetic compatibility" for the year 2016. It is shown that the authors claim that this model "...will more accurately assess the reliability of CMOS VHSIC design" is fundamentally flawed and its application will inevitably lead to inadequate results. Alternatively, the proposed model of the failure rate of CMOS VHSIC design, which also allows to take into account the views of ESD, but based on the use of resistance characteristics of CMOS VHSIC to the effects of ESD.

On Error Estimates of the Crank-Nicolson-Polylinear Finite Element Method with the Discrete TBC for the Generalized Schrödinger Equation in an Unbounded Parallelepiped
Zlotnik Alexander. arxiv.org. math. Cornell University, 2015
We deal with an initial-boundary value problem for the generalized time-dependent Schr\"odinger equation with variable coefficients in an unbounded $n$--dimensional parallelepiped ($n\geq 1$). To solve it, the Crank-Nicolson in time and the polylinear finite element in space method with the discrete transpa\-rent boundary conditions is considered. We present its stability properties and derive new error estimates $O(\tau^2+|h|^2)$ uniformly in time in $L^2$ space norm, for $n\geq 1$, and mesh $H^1$ space norm, for $1\leq n\leq 3$ (a superconvergence result), under the Sobolev-type assumptions on the initial function. Such estimates are proved for methods with the discrete TBCs for the first time.
Finite element method with discrete transparent boundary conditions for the time-dependent 1D Schrödinger equation
Zlotnik A., Zlotnik I. A. Kinetic and Related Models. 2012. Vol. 5. No. 3. P. 639-667.

We consider the time-dependent 1D Schrödinger equation on the half-axis with variable coefficients becoming constant for large x. We study a two-level symmetric in time (i.e. the Crank-Nicolson) and any order finite element in space numerical method to solve it. The method is coupled to an approximate transparent boundary condition (TBC). We prove uniform in time stability with respect to initial data and a free term in two norms, under suitable conditions on an operator in the approximate TBC. We also consider the corresponding method on an infinite mesh on the half-axis. We derive explicitly the discrete TBC allowing us to restrict the latter method to a finite mesh. The operator in the discrete TBC is a discrete convolution in time; in turn its kernel is a multiple discrete convolution. The stability conditions are justified for it. The accomplished computations confirm that high order finite elements coupled to the discrete TBC are effective even in the case of highly oscillating solutions and discontinuous potentials.

The study is carried out by the first author within The National Research University Higher School of Economics' Academic Fund Program in 2012-2013, research grant No. 11-01-0051.

The description of the software with a free code and technology of its application in educational process is resulted.

Математические основы машинного обучения и прогнозирования
Вьюгин В. В. М.: МЦНМО, 2013.
Формализация dataflow-модели вычислительного процесса
Салибекян С. М., Панфилов П. Б. В кн.: Объектные системы - 2013: материалы VII Международной научно-практической конференции, Ростов-на-Дону, 10-12 мая 2013 г.. Ростов н/Д: 2013. С. 87-93.
Finite element error analysis for measure-valued optimal control problems governed by a 1D wave equation with variable coefficients
Trautmann P., Vexler B., Zlotnik A. Working papers by Cornell University. Cornell University, 2017. No. 1702.00362.
This work is concerned with the optimal control problems governed by the 1D wave equation with variable coefficients and the control spaces $\mathcal M_T$ of either measure-valued functions $L^2(I,\mathcal M(\Omega))$ or vector measures $\mathcal M(\Omega,L^2(I))$. The cost functional involves the standard quadratic terms and the regularization term $\alpha\|u\|_{\mathcal M_T}$, $\alpha>0$. We construct and study three-level in time bilinear finite element discretizations for the problems. The main focus lies on the derivation of error estimates for the optimal state variable and the error measured in the cost functional. The analysis is mainly based on some previous results of the authors. The numerical results are included.
On the Richardson extrapolation in time of finite element method with discrete TBCs for the Cauchy problem for the 1D Schrödinger equation
Zlotnik Alexander, Zlotnik Ilya. arxiv.org. math. Cornell University, 2014. No.  arXiv:1405.3147.
We consider the Cauchy problem for the 1D generalized Schrödinger equation on the whole axis. To solve it, any order finite element in space and the Crank-Nicolson in time method with the discrete transpa\-rent boundary conditions (TBCs) has recently been constructed. Now we engage the Richardson extrapolation to improve significantly the accuracy in time step. To study its properties, we give results of numerical experiments and enlarged practical error analysis for three typical examples. The resulting method is able to provide high precision results in the uniform norm for reasonable computational costs that is unreachable by more common 2nd order methods in either space or time step. Comparing our results to the previous ones, we obtain much more accurate results using much less amount of both elements and time steps.
Information Systems and Technologies to Support Learning. Proceedings of EMENA-ISTL 2018
Iss. 111. Cham: Springer, 2019.

This book features a selection of articles from the second edition of the conference Europe Middle East & North Africa Information Systems and Technologies to Support Learning 2018 (EMENA-ISTL'18), held in Fez, Morocco between 25th and 27th October 2018. EMENA-ISTL’18 was a global forum for researchers and practitioners to present and discuss recent findings and innovations, current trends, professional experiences and challenges in information systems & technologies to support learning.