М.: Гнозис, 2004.
Editor-in-chief: Ю. А. Ландер, В. А. Плунгян, А. Ю. Урманчиева
Chapters
Границы (ир)реальности: дативные формы глагола в языках пама-ньюнга
Ландер Ю. А. В кн.: Исследования по теории грамматики 3: Ирреалис и ирреальность. М.: Гнозис, 2004. С. 147-176.
A large number of Pama-Nyungan languages spoken in Australia display the existence of verb forms whose marking involves a dative suffix or a morpheme related to a dative formant. These dative verb forms show an interesting behavior in that they (i) can be used both in independent and in subordinate clauses and (ii) have a wide range of functions including, e.g., marking of complements, the expression of purpose and consequence as well as certain prospective and modal functions. It is argued that this became possible mainly due to the non-configurational characteristics of Pama-Nyungan languages, which resulted in the formal absence of the delimitation of various functions. Moreover, it seems that the inventory of functions found among dative verb forms may be derived from the referential characteristics of the corresponding utterances. The corresponding semantic category of “situational referentiality” is suggested to be identified with that of (ir)reality.
Research target: Philology and Linguistics
Priority areas: humanitarian
Language: Russian
Keywords: irrealismodalitymood 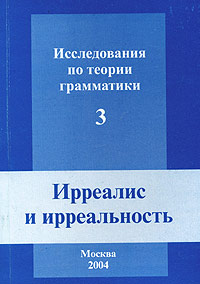 The Caucasus is the place with the greatest linguistic variation in Europe. The present volume explores this variation within the tense, aspect, mood, and evidentiality systems in the languages of the North-East Caucasian (or Nakh-Daghestanian) family. The papers of the volume cover the most challenging and typologically interesting features such as aspect and the complicated interaction of aspectual oppositions expressed by stem allomorphy and inflectional paradigms, grammaticalized evidentiality and mirativity, and the semantics of rare verbal categories such as the deliberative (‘May I go?’), the noncurative (‘Let him go, I don’t care’), different types of habituals (gnomic, qualitative, non-generic), and perfective tenses (aorist, perfect, resultative). The book offers an overview of these features in order to gain a broader picture of the verbal semantics covering the whole North-East Caucasian family. At the same time it provides in-depth studies of the most fascinating phenomena.

Границы (ир)реальности: дативные формы глагола в языках пама-ньюнга
Ландер Ю. А. В кн.: Исследования по теории грамматики 3: Ирреалис и ирреальность. М.: Гнозис, 2004. С. 147-176.
A large number of Pama-Nyungan languages spoken in Australia display the existence of verb forms whose marking involves a dative suffix or a morpheme related to a dative formant. These dative verb forms show an interesting behavior in that they (i) can be used both in independent and in subordinate clauses and (ii) have a wide range of functions including, e.g., marking of complements, the expression of purpose and consequence as well as certain prospective and modal functions. It is argued that this became possible mainly due to the non-configurational characteristics of Pama-Nyungan languages, which resulted in the formal absence of the delimitation of various functions. Moreover, it seems that the inventory of functions found among dative verb forms may be derived from the referential characteristics of the corresponding utterances. The corresponding semantic category of “situational referentiality” is suggested to be identified with that of (ir)reality.
The verbless subjunctive in Russian
Dobrushina N. Humanities. HUM. Basic Research Programme, 2013. No. 32/HUM/2013.
The Russian subjunctive particle by can be used in constructions that lack any finite verb form, including constructions involving infinitives, predicative adverbs or adjectives, and nouns. The properties of these constructions are compared, and a conclusion is made that verbless subjunctives share a common semantic component, namely a wish or necessity. A survey of the development of subjunctive verbless constructions with predicative adverbs and adjectives shows that the evolution of the optative meaning took place during the last two centuries.
Анализ настроений методом структурно-логической типизации
Климова С. Г., Галицкая Е. Г. Социология: методология, методы, математическое моделирование. 2010. № 30. С. 107-130.

Improving prediction of stock market indices by analyzing the psychological states of Twitter users.
Porshnev A., Redkin I. E., Shevchenko A. V. Economics/EC. WP BRP. Высшая школа экономики, 2013. No. 22.
In our paper, we analyze the possibility of improving the prediction of stock market indicators by conducting a sentiment analysis of Twitter posts. We use a dictionary-based approach for sentiment analysis, which allows us to distinguish eight basic emotions in the tweets of users. We compare the results of applying the Support Vector Machine algorithm trained on three sets of data: historical data, historical and “Worry”, “Fear”, “Hope” words count data, historical data and data on the present eight categories of emotions. Our results suggest that the Twitter sentiment analysis data provides additional information and improves prediction as compared to a model based solely on information on previous shifts in stock indicators.
Machine learning in prediction of stock market indicators based on historical data and data from Twitter sentiment analysis.
Porshnev A., Redkin I. E., Shevchenko A. V. In bk.: 2013 IEEE 13th International Conference on Data Mining Workshops. Los Alamitos: IEEE Computer Society, 2013. Ch. 9.3. P. 440-444.

Development of linguistic technologies and penetration of social media provide powerful possibilities to investigate users’ moods and psychological states of people. In this paper we discussed possibility to improve accuracy of stock market indicators predictions by using data about psychological states of Twitter users. For analysis of psychological states we used lexicon-based approach, which allow us to evaluate presence of eight basic emotions in more than 755 million tweets. The application of Support Vectors Machine and Neural Networks algorithms to predict DJIA and S&P500 indicators are discussed.

After an introductory chapter that provides an overview to theoretical issues in tense, aspect, modality and evidentiality, this volume presents a variety of original contributions that are firmly empirically-grounded based on elicited or corpus data, while adopting different theoretical frameworks. Thus, some chapters rely on large diachronic corpora and provide new qualitative insight on the evolution of TAM systems through quantitative methods, while others carry out a collostructional analysis of past-tensed verbs using inferential statistics to explore the lexical grammar of verbs. A common goal is to uncover semantic regularities and variation in the TAM systems of the languages under study by taking a close look at context. Such a fine-grained approach contributes to our understanding of the TAM systems from a typological perspective. The focus on well-known Indo-European languages (e.g. French, German, English, Spanish) and also on less commonly studied languages (e.g. Hungarian, Estonian, Avar, Andi, Tagalog) provides a valuable cross-linguistic perspective.

Modality of representations
Vladimir L. Popov. arxiv.org. math. Cornell University, 2017. No. arXiv:1707.07720v1 [math.RT] 24 Jul 2017.
We first establish several general properties of modality of al- gebraic group actions. In particular, we introduce the notion of a modali- ty-regular action and prove that every visible action is modality-regular. Then, using these results, we classify irreducible linear representations of connected simple algebraic groups of every fixed modality < 3. Next, ex- ploring a finer geometric structure of linear actions, we generalize to the case of any cyclically graded semisimple Lie algebra the notion of a packet (or a Jordan/decomposition class) and establish the properties of packets.
What is the jussive for? A study of third person commands in six Caucasian Languages
Dobrushina N. Linguistics. 2012. Vol. 50. No. 1. P. 1-25.