From the Judge's Arbitrium to the Legality Principle: Legislation as a Source of Law in Criminal Trial

The vollume addresses the modern history of legality principle  – central to all western legal systems. Contributions provide comparative look at various parts of the Western world, including Argentina, Finland, and Russia, in order to reveal the common path of legality principle development and its local variations.

The article describes and analizes the issue of access to all potential legal sources in late imperial Russia as an important component of legality principle. The author investigates how local features of political and administrative culture and legal professionalism determined the specific practical application of this principle. 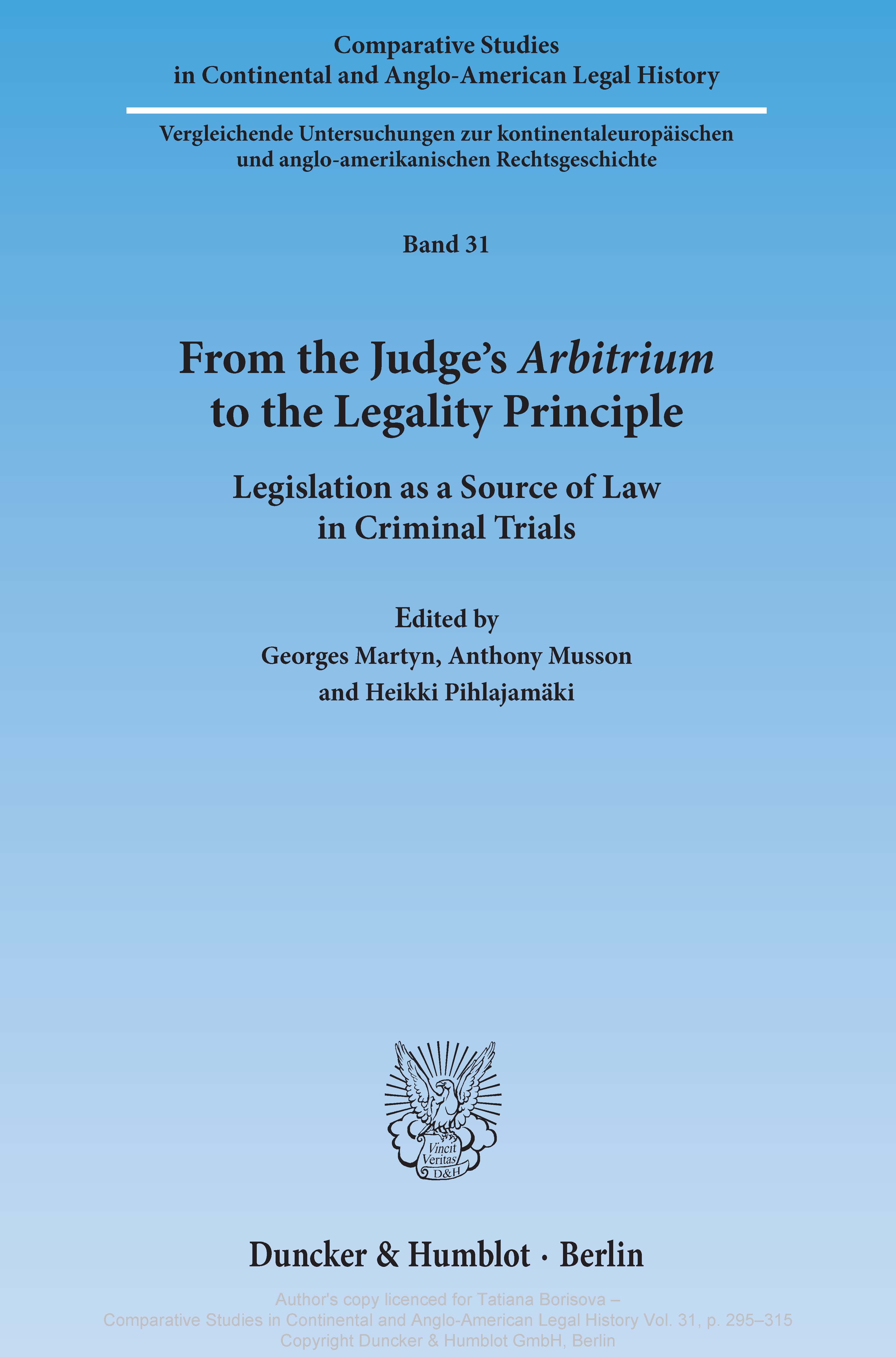 Similar publications
The Legitimacy of the Bolshevik Order, 1917-1918: Language Usage in Revolutionary Russian Law
Borisova T. Y. Law. LAW. Высшая школа экономики, 2012. No. 05.
The article describes and analyzes the legislative politics of revolutionary regimes in Russia in 1917-1918. The author aims to demonstrate the political meaning of the form of early Soviet legislation and its legitimizing effect. The revolutionary legislators often used specific language in the new laws as a vehicle of legitimacy, i.e. to make the people comply. The two main types of legal language used by the Bolsheviks can be interpreted from the perspective of different types of legitimacy. The revolutionary strategy used propagandistic legislation, written in the language of lay people, which urged them to act according to the new law. It can be seen as a request for acts of the people to legitimize the soviets. On the contrary, the traditional strategy employed old bureaucratic means of writing and distributing legislation to the local soviets. The language used by this strategy was closed to the understanding of a lay audience and implied traditions of obeying the law written in familiar legal language, which in turn implied rational/legal legitimacy. The second strategy had already become dominant after the first months of the Bolshevik revolution. This observation demonstrates that from the very beginning of their rule, Soviet leaders approached legislative policy from a technocratic point of view, which determined the further development of Soviet legal theory and practice.
Legislation as a Source of Law in Late Imperial Russia
Borisova T. Y. Law. LAW. Высшая школа экономики, 2012. No. 04.
This article analyzes the usage of legislation as a legal source in the Russian Empire through the phenomenon of the publication of law. The author argues that the absence of separation of executive, legislative and court powers had definite negative effects for lawmaking and enforcement. The legislative politics of Russian emperors could be analyzed using Jürgen Habermas‘ concept of ―representative publicness‖ (representative öffentlichkeit): to a large extent, the tsars considered law as both an assertion of authority and a means of governing. Their actions towards strengthening legality in the state (i.e. the compulsory publication of legislation) were in essence symbolic or theatrical. In fact, since the separation of laws from executive acts did not exist in imperial Russia, the legislation was published (or stayed unpublished) exclusively for state administrators. The conflict in conceptions of legality between state and civil actors in the second half of the nineteenth century was not of a merely political nature. The article demonstrates that there was a public demand for publication of legislation; insufficient accessibility of legal information negatively influenced social and economic development in imperial Russia.
Презумпция знания норм уголовного законодательства как условия вины и ответственности за преступления в сфере экономической деятельности
Панченко П. Н. Право и государство: теория и практика. 2010. № 12. С. 111-115.

The chapter is devoted to basic priniples of the Rssian criminal law. It is specifically mentioned the history of the principles and its current reflection in the Russian Criminal Code of 1996. The author discusses the structure of crime and the punishments inflicted upon its commission.

The Digest of Laws of the Russian Empire: the Phenomenon of Autocratic Legality
Borisova T. Y. Law. LAW. Высшая школа экономики, 2012. No. 03.