In " American Yearbook 2013 " published articles and other materials on the history of the United States, Canada and Latin America of XVII - beginning of XXI century . Materials of the discussion of Russian historians on theoretical and methodological issues of studying modern history of U.S. foreign policy , as in the article about the role of Woodrow Wilson in the American foreign policy tradition and continuation of the study on the North American contacts Francisco de Miranda in the early XIX century. Contained under the heading " U.S. foreign policy . Some aspects of perception of the U.S. and UK in the first half of the XIX century. Specificity of Chinese immigration to the United States, the activities of contemporary American religious organizations, dramatic events in Philadelphia during the War of Independence (1775-1783) are discussed in articles published under the heading "Internal political aspects U.S. history". Section "The U.S. and Russia" are devoted to activities in Russia the first American military attache F.V. Green (second half of the XIX century), Relations between Russia and the United States in the Far East (1904-1914) , William Bullitt mission to Soviet Russia(1919), the problem of development of legislation of Lend-Lease and the perception of the USSR ( 1943-1945), becoming Russian -American scientific relations (late XIX century) and representatives of the Russian contribution to the spread of foreign Russian opera classics in the U.S. (1930). Canadian and Latin American issues presented studies which analyze the socio-demographic processes that took place in Acadia during the French colonization (1604-1713), and views of the Argentine Domingo Faustino Sarmiento educator about the value of the U.S. experience for the modernization of Argentina. The regular "Bibliography" lists works published in Russian on the history of the United States and Canada , which was published in 2011-2013. For historians, political scientists , economists, and anyone interested in the history of the United States and Canada and Latin America . 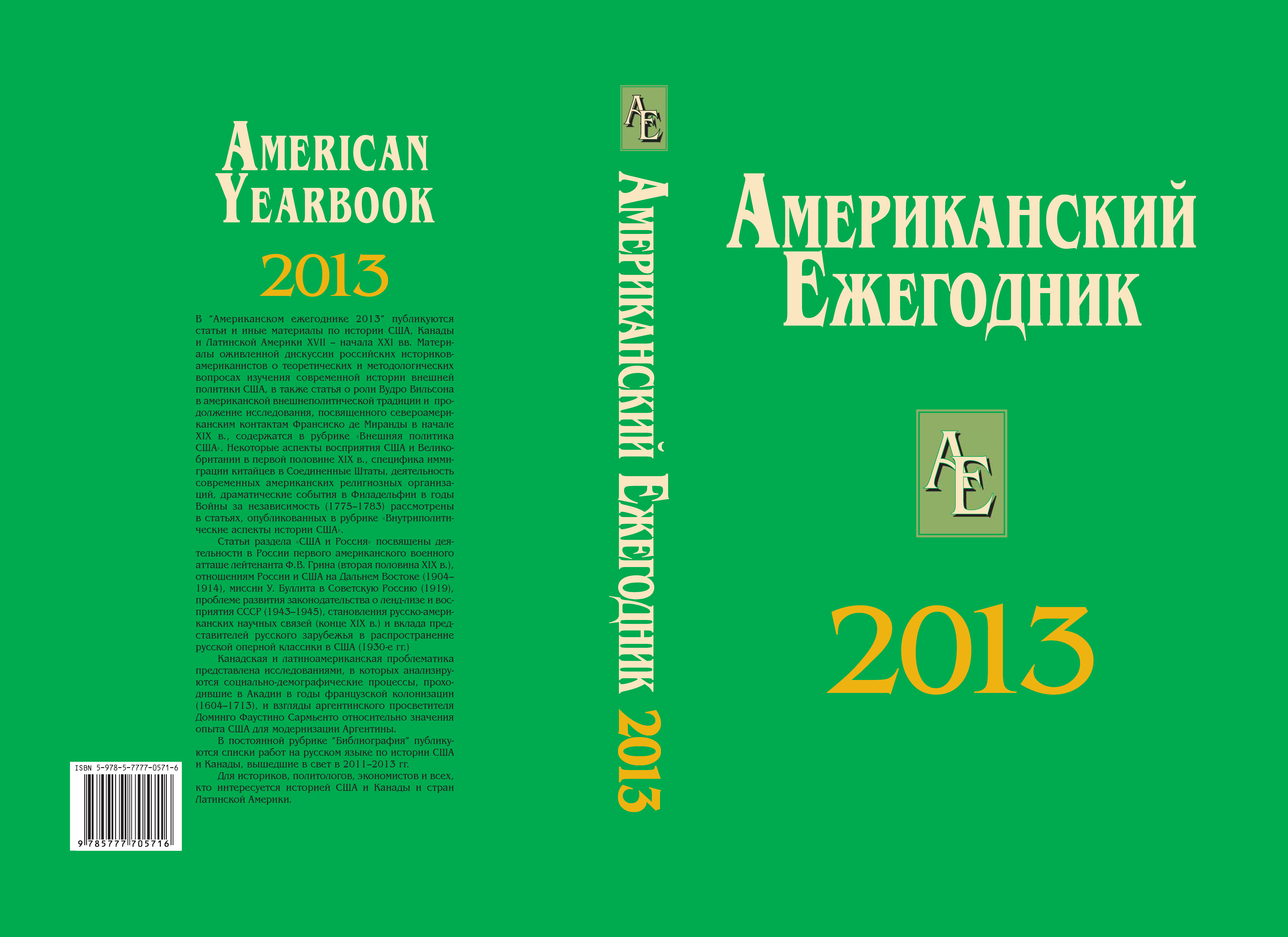 Similar publications
Paleoconservatism of the Southern Agrarians
Belkovich R. Law. LAW. Высшая школа экономики, 2013
The emergence of the Tea Party movement in recent years has shown that under the surface of mainstream political life in the USA there exists a different layer of ideas, which cannot be satisfactorily described in terms of the Republican/Democrat dichotomy. These ideas have their origins in the foundation of the American Republic, which owes a lot to ancient and mediaeval political theory. In the twentieth century there was a revival of these ideas in the form of the so-called “paleoconservative” movements which rediscovered their ancient and mediaeval heritage. This paper focuses on one of them, the Southern Agrarian movement, as exemplary of this radical intellectual project.
Императорская Россия
Анисимов Е. В. СПб.: Питер, 2008.
Квакеры в Англии и североамериканских колониях в XVII веке
Короткова С. А. В кн.: Религия и политика в Европе XVI -XX вв.. Смоленск: Смоленский государственный педагогический университет, 1998. С. 62-71.

Volume is devoted to a wide range of issues of history and modern foreign countries.

The article analyses the long political career and life of Mwai Kibaki, former President of Kenya.

In 1922 a group of Americans moved from the Pacific Northwest to Soviet Russia to settle an agricultural commune they called Seattle. The Seattle Commune was one among many enterprises founded by foreign sympathizers in the new Soviet republic. All these communes faced obstacles and most collapsed by the end of the decade. In contrast, Seattle persisted as a commune, lasting from 1939 to 1991 as a collective farm. Scholars have argued that the success of foreign communes hinged on their members' ideological commitment to the Soviet cause. Using correspondence, archival documents, and journalistic accounts from the United States and Russia, this case study of the Seattle Commune's early years argues that material factors mattered as much as ideology for the survival of Soviet agricultural communes. Commune members wanted to build a communist future but also envisioned prosperity for themselves and their communities as an element of this future.