"American Yearbook 2011" presented articles of Russian and American authors on various issues of U.S. history , Canada and Latin America , the history of Russian -American relations and Russian America. Published bibliography of works on the history of the United States and Canada which were published in Russian in 2009-2011. For historians, political scientists , and anyone interested in the history of America. 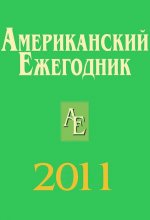 Similar publications
Paleoconservatism of the Southern Agrarians
Belkovich R. Law. LAW. Высшая школа экономики, 2013
The emergence of the Tea Party movement in recent years has shown that under the surface of mainstream political life in the USA there exists a different layer of ideas, which cannot be satisfactorily described in terms of the Republican/Democrat dichotomy. These ideas have their origins in the foundation of the American Republic, which owes a lot to ancient and mediaeval political theory. In the twentieth century there was a revival of these ideas in the form of the so-called “paleoconservative” movements which rediscovered their ancient and mediaeval heritage. This paper focuses on one of them, the Southern Agrarian movement, as exemplary of this radical intellectual project.
Симон Боливар: обзор российской историографии
Эль-Ашкар А. Х. Труды кафедры истории Нового и новейшего времени. 2010. № 5. С. 148-162.
Американский ежегодник. 2007
М.: Наука, 2009.

The yearbook published materials about the period from the end of XVIII to the middle of XX century. The authors examine a wide range of problems - from the ratification of the Constitution in 1787 in Massachusetts to the so-called American university novel. The reader will find little-known travel impressions of poet Balmont from a trip to America in the early XX century. Under the heading "America and Russia" a comparative analysis of the relationship of Russian and American to aborigines, examined the activities of the Soviet scientific, technical and industrial intelligence in the U.S. during the Second World War. Canadian themes represented by articles on the protection of fur seals in the Russian -Canadian relations at the turn of XIX-XX centuries. and the evolution of the Canada -Mexico bilateral relations. In the " Bibliography " are works on the history of the United States and Canada, published in Russian in 2007-2008 . For historians, political scientists and all those interested in the history of America.

Exploring performances of Russian music at the Metropolitan Opera in New York allows observing the evolutions and paradigmatic changes in American high-brow cultural discourse and analyzing changing structures of repertoire policies and public preferences over the period that covers the entire existence of the Met between 1883 and December 2016. Using the opera’s digital archive, a number of queries on leading Russian composers (Glinka, Tchaikovsky, Mussorgsky, Borodin, Rimsky-Korsakov, Stravinsky, Prokofiev, and Shostakovich) were conducted in order to examine the interrelationship between cultural, political, and musical-historical factors that fed into repertoire dynamics and their reflection in the public space. Within the general operatic context, the Russians could never vie the dominating Italian and German composers. However, Russian authors have consistently taken mid-range positions and their works gained substantial public visibility. Tchaikovsky and Mussorgsky emerged as leaders throughout the period of the inquiry, confirming the thesis of reductionist conservatism of the standard opera repertoire at the Met. Modern composers showed different dynamics, with Stravinsky clearly surpassing the Soviet school due to his public stature, a long period of stay in America, particular position as the doyen of 20th century music, and cultural-political involvement during cold war. Indeed, all important premieres of Prokofiev and Shostakovich fall into the period after 1991, and the critical reactions show the centrality of democracy-totalitarianism binomial in the construction of discourses on contemporary Soviet music. Economic and macro-political factors did not necessarily have a direct impact on opera performances: while the Great Depression years expectedly show an ebbing down of operatic activities, the wartime alliance did not translate in a spike in Russian performances. Favorable economic conjuncture of the post-war period and continuous media expansion of the Met ensured the growing quantity and increasing prominence of Russian works within the New York and American society, available to audiences larger than New York's educated public thanks to Met’s Anglicization policy, performances at various venues at home and abroad, and radio, television, and internet broadcasts. The market made Tchaikovsky’s rule supreme, otherwise leading to partial diversification of Russian repertoire, favored by growing internationalization and public stature of the Met. Overall, the transferred imageries included exoticism, high quality expectations (concomitant with growing musical prestige) and often contradictory perceptions of Russia that went beyond the immediate political agenda and fitted the globalizing patterns of “national” opera repertoire and discourse.