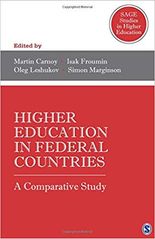 Higher Education in Federal Countries: A Comparative Study is a unique study of higher education in nine federal countries—the United States, Canada, Australia, Germany, Mexico, Brazil, Russia, China and India. In this book, leading international scholars discuss the role of federalism and how it shapes higher education in major nation-state actors on the world stage. The editors develop an overarching comparative analysis of the dynamics of central and regional power in higher education, and the national case studies explain how each federal and federal-like higher education system has evolved and how it functions in what are highly varied contexts.

The book makes a major contribution to higher education studies and defines a new field of comparative analysis. It also provides important insights into comparative governance and the study of federalism and federal arrangements, with their particular historical, political, legal and economic dimensions.