by year
Subject
News
Researchers Propose Method to Increase Charge of Supercapacitors
Researchers from HSE MIEM and the Institute of Non-Classical Chemistry in Leipzig have proposed a new theoretical model of supercapacitors that takes into account the properties of a cation, which considerably impacts the electric differential capacitance of supercapacitors. This is the first publication of its kind in electrochemistry. The authors believe that the model will allow engineers to create more powerful energy sources in the future. The results of the study were published in The Journal of Physical Chemistry C. The study was completed with support from a grant by RSF.
HSE University Researchers Develop First Standardized Russian-Language Test for Aphasia-related Disorders
Researchers from the HSE University Centre for Language and Brain have created and standardized a new test battery for diagnosing language disorders in people with brain damage. The test is the first standardized assessment tool in Russia in the field. The paper entitled ‘The Russian Aphasia Test: The first comprehensive, quantitative, standardized, and computerized aphasia language battery in Russian’ has just beenpublished in the PLOS ONE journal.
‘We Know Where to Find Geoinformation and How to Work with It’
In October, the HSE Faculty of Geography and Geoinformation Technology launched the Geodata Centre. In addition to developing its own research and commercial projects, the Centre provides auxiliary educational services related to the collection and processing of spatial data, performs geographic analysis, captures video and photo using drones, and processes data received via remote probing of the Earth. Tatiana Aniskina, Head of the Centre, speaks about the importance of geodata.
Publications
Author:
Campus:
Any
Moscow
Saint Petersburg
Nizhny Novgorod
Perm
Sub-department:
Keywords:
Subject:
Priority areas:
▼
Language:
▼
russian  english
Year:
2022
1958
Add a filter
Of all publications in the section: 7
Sort:
by name
by year

Akkadian, the oldest surviving Semitic language and one of the most important Ancient Near Eastern languages, is one of the best documented languages of the ancient world. This nine volume encyclopedic set presents a detailed compendium of Akkadian vocabulary that will prove a vital resource for students and scholars of language, Ancient Near Eastern studies, and all those with a wider interest in Akkadian writings. 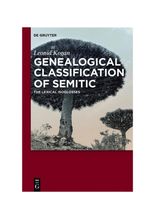 This volume is the first of its kind to offer a detailed, monographic treatment of Semitic genealogical classification. The introduction describes the author's methodological framework and surveys the history of the subgrouping discussion in Semitic linguistics, and the first chapter provides a detailed description of the proto-Semitic basic vocabulary. Each of its seven main chapters deals with one of the key issues of the Semitic subgrouping debate: the East/West dichotomy, the Central Semitic hypothesis, the North West Semitic subgroup, the Canaanite affiliation of Ugaritic, the historical unity of Aramaic, and the diagnostic features of Ethiopian Semitic and of Modern South Arabian. The book aims at a balanced account of all evidence pertinent to the subgrouping discussion, but its main focus is on the diagnostic lexical features, heavily neglected in the majority of earlier studies dealing with this subject. The author tries to assess the subgrouping potential of the vocabulary using various methods of its diachronic stratification. The hundreds of etymological comparisons given throughout the book can be conveniently accessed through detailed lexical indices.

Aristotle’s neat compartmentalization notwithstanding (Poetics, ch. 9), historians and playwrights have both been laying claim to representations of the past – arguably since Antiquity, but certainly since the Renaissance. At a time when narratology challenges historiographers to differentiate their “emplotments” (White) from literary inventions, this thirteen-essay collection takes a fresh look at the production of historico-political knowledge in literature and the intricacies of reality and fiction.

Written by experts who teach in Germany, Austria, Russia, and the United States, the articles provide a thorough interpretation of early modern drama (with a view to classical times and the 19th century) as an ideological platform that is as open to royal self-fashioning and soteriology as it is to travestying and subverting the means and ends of historical interpretation. The comparative analysis of metapoetic and historiosophic aspects also sheds light on drama as a transnational phenomenon, demonstrating the importance of the cultural net that links the multifaceted textual examples from France, Russia, England, Italy, and the Netherlands.

This monograph aspires to lay the foundations of a new scientific discipline, demoeconomics, representing the synthesis of demography and spatial economics. This synthesis is performed in terms of interaction between population and its economic activity. The monograph appears a unique research work having no analogs in scientific literature. Demoeconomic systems are studied involving the macrosystems approach which combines the generalized entropy maximization principle and the local equilibria principle. Demoeconomic systems operate in an uncertain environment; thus and so, the monograph develops the methodology and technique of probabilistic modeling and forecasting of their evolution.

The subject of this book is theory of quantum system presented from information science perspective. The central role is played by the concept of quantum channel and its entropic and information characteristics. Quantum information theory gives a key to understanding elusive phenomena of quantum world and provides a background for development of experimental techniques that enable measuring and manipulation of individual quantum systems. This is important for the new efficient applications such as quantum computing, communication and cryptography. Research in the field of quantum informatics, including quantum information theory, is in progress in leading scientific centers throughout the world. This suggests a need for a text that not only introduces the basic concepts of quantum information theory, but also presents in detail some of its recent achievements. The book gives an accessible, albeit mathematically rigorous and self-contained introduction to the subject, starting from primary structures and leading to fundamental results and to exiting open problems.

The papers of the present volume investigate the potential of the metaphor of life as theater for literary, philosophical, juridical and epistemological discourses from the Middle Ages through modernity, and focusing on traditions as manifold as French, Spanish, Italian, German, Russian and Latin-American.