by year
Subject
News
Towards Finding Practical Solutions to Socially Significant Healthcare Problems
The Centre for Language and Brain in Nizhny Novgorod started operations in September 2020. Today, it is comprised of a team of linguists - teachers and students - who are researching the relations between speech and parts of the brain. The Director of the Centre, Natalya E. Gronskaya, spoke to the HSE Look about how the neuro-linguistic laboratory appeared in Nizhny Novgorod, as well as current tasks and prospects the Centre can offer the students and the region.
Global Innovation Index 2021 Unveiled
Russia has improved its position in the Global Innovation Index (GII) 2021, ranking 45th among 132 economies and closing the distance to leading countries thanks to better performance in all areas of research, innovation, and creative activities. For the past several years, the Institute for Statistical Studies and Economics of Knowledge (ISSEK) at HSE University has provided advice on the research underlying the index. This year, ISSEK became one of the nine members of the GII Academic Partners Network.
Why Badly Trained AI Is a Bigger Threat Than a Robot Uprising
At the present level of AI development, humanity doesn’t have to worry about a machine uprising just yet. However, the use of improperly trained AIs in important fields and attempts to use it to exercise control over people’s lives may pose a real threat in the near future. This was the topic of a seminar on ‘The Unexpected Threats of AI’ recently hosted by the HSE University Laboratory of Transcendental Philosophy.
Publications
Author:
Campus:
Any
Moscow
Saint Petersburg
Nizhny Novgorod
Perm
Sub-department:
Keywords:
Subject:
Priority areas:
▼
Language:
▼
russian  english
Year:
2022
1958
Add a filter
Of all publications in the section: 2
Sort:
by name
by year

Two volumes of the book with common title "The Constitution of Cadiz of 1812" are also united by a common idea: to present to readers one of the remarkable episodes of European history at the beginning of the 19th century. It took place in Spain and received a response in Russia.The first volume includes facsimile reproductions of three manuscripts:   the Spanish Constitution of 1812, adopted in Cadiz and its translations into French and Russian, done for Emperor Alexander I. Their originals, stored in the Department of Manuscripts of the Russian National Library, were found their by  the compiler of this book (T.Alexeeva) and for the first time the Russian reading audience has an opportunity to reed them.. 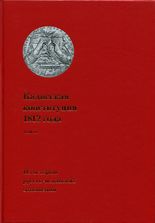 The two-volume edition of "Cádiz Constitution of 1812" was prepared by T.in connection with the 200th anniversary of the Spanish Constitution, adopted in 1812 in the city of Cadiz during the War of the Spanish people, betrayed by its Rulers, against the forces of Napoleonic France. The Constitution became known  in Russia. Some of its aspects are presented in the book by the treaty, constitutional texts, memories, testimonies of the Decembrists, fragments of scientific and artistic works.   In the introductory article "The Political Constitution of the Spanish Monarchy and Russia" T. Alexeeva  dedicates to the history of the Constitution`s elaboration and adoption, characterization of formal and substantial features, its popularity in Russia, role in the history of Russian-Spanish relations, to the "Spanish echo" in the Decembrist movement.