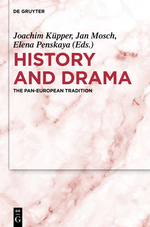 The book, which includes chapters written by experts from Germany, Austria, Russia and the United States, represents a collection of essays on the relationship between historical narratives and drama from Classical Antiquity to the 19th century, examining a wide range of textual examples from France, Russia, England, Italy, and the Netherlands. Articles by Poletayev Institute researchers Julia Ivanova and Pavel Sokolov look at the use of historical narratives in political drama of early modernity, within the respective frameworks of Niccolo Machiavelli’s comedy The Mandrake and the Dutch playwright Pieter Corneliszoon Hooft’s Geeraerdt van Velsen.

The book is available online.