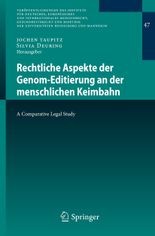 The book contains 19 national reports and a comparative legal analysis of the legal regulations on the procedure of genome editing on the human germline. It is worked out which shared values ​​the different legal systems connect and which differences exist. On this basis, it is examined whether an international regulation of the topic is possible and how it could be designed. In addition, it will be examined to what extent the regulations of other countries can serve as a model for German legislation.

Objective: This review discusses the relationships between sleep, obesity, and breathing disorders with concomitant risks of developing cancer.

Results: Sleep disorders result in an abnormal expression of clock genes, decreased immunity, and melatonin release disruption. Therefore, these disorders may contribute to cancer development. Moreover, in sleep breathing disorder, which are frequently experienced by the obese persons, the sufferer experiences intermittent hypoxia that may stimulate cancer cell proliferation.

Conclusion: Several factors including insomnia, circadian disruption, obesity, and intermittent hypoxia in obstructive sleep apnea are contributing risk factors for increased risk of several types of cancers. However, further studies are needed to determine the more significant of these risk factors and their interactions.

Background: The ability of the human body to produce metabolic energy from light modifies fundamental concepts of biochemistry.

Objective: This review discusses the relationships between the long-accepted concept is that glucose has a unique dual role as an energy source and as the main source of carbon chains that are precursors of all organic matter. The capability of melanin to produce energy challenges this premise.

Results: The prevalent biochemical concept, therefore, needs to be adjusted to incorporate a newly discovered state of Nature based on melanin’s ability to dissociate water to produce energy and to reform water from molecular hydrogen and oxygen.

Discussion: Our findings regarding the potential implication of QIAPI-1 as a melanin precursor that has bioenergetics capabilities.

Conclusion: Specifically, we reported its promising application as a means for treating retinopathy of prematurity (ROP). The instant report focuses on the long-term treatment medical effects of melanin in treating ROP.

Background: In this review we survey medical treatments and research strategies, and we discuss why they have failed to cure degenerative disc diseases or even slow down the degenerative process.

Objective: We seek to stimulate discussion with respect to changing the medical paradigm associated with treatments and research applied to degenerative disc diseases.

Preliminary Studies: A single-patient case study is presented that documents complete recovery from an advanced lumbar bilateral discopathy and long-term hypertrophic chronic rhinitis by application of the method proposed.

Conclusion: Biological transformations controlled by the mind can be applied by men and women in order to improve their quality of life and cure degenerative disc diseases and chronic inflammations illnesses.

Objective: Glioblastoma is a highly aggressive and invasive brain and Central Nervous System (CNS) tumor. Current treatment options do not prolong overall survival significantly because the disease is highly prone to relapse. Therefore, research to find new therapies is of paramount importance. It has been discovered that glioblastomas contain a population of cells with stem-like properties and that these cells are may be responsible for tumor recurrence.

Methods: A review of relevant papers and clinical trials in the field was conducted. A PubMed search with related keywords was used to gather the data. For example, “glioblastoma stem cells AND WNT signaling” is an example used to find information on clinical trials using the database ClinicalTrials.gov.

Results: Cancer stem cell research has several fundamental issues and uncertainties that should be taken into consideration. Theoretically, a number of treatment options that target glioblastoma stem cells are available for patients. However, only a few of them have obtained promising results in clinical trials. Several strategies are still under investigation.

Conclusion: The majority of treatments to target cancer stem cells have failed during clinical trials. Taking into account a number of biases in the field and the number of unsuccessful investigations, the application of the cancer stem cells concept is questionable in clinical settings, at least with respect to glioblastoma.

The radiation of human skin in the terahertz frequency range under the influence of mental stresses has been studied in the current work. An experimental setup for observation of changes in human skin radiation, which occur under the influence of psychological stresses, by means of a superconducting integrated receiver has been developed. More than 30 volunteers participate in these studies, which allows us to verify presence of correlation between the signals from the superconducting integrated terahertz receiver and other sensors that monitor human mental stress.

Background: Chromosomal rearrangements are the typical phenomena in cancer genomes causing gene disruptions and fusions, corruption of regulatory elements, damage to chromosome integrity. Among the factors contributing to genomic instability are non-B DNA structures with stem-loops and quadruplexes being the most prevalent. We aimed at investigating the impact of specifically these two classes of non-B DNA structures on cancer breakpoint hotspots using machine learning approach.

Results: We performed analysis of 487,425 breakpoints from 2234 samples covering 10 cancer types available from the International Cancer Genome Consortium. We showed that distribution of breakpoint hotspots in different types of cancer are not correlated, confirming the heterogeneous nature of cancer. It appeared that stem-loop- based model best explains the blood, brain, liver, and prostate cancer breakpoint hotspot profiles while quadruplex- based model has higher performance for the bone, breast, ovary, pancreatic, and skin cancer. For the overall cancer profile and uterus cancer the joint model shows the highest performance. For particular datasets the constructed models reach high predictive power using just one predictor, and in the majority of the cases, the model built on both predictors does not increase the model performance.

Towards embedding Caco-2 model of gut interface in a microfluidic device to enable multi-organ models for systems biology
Tonevitsky A., Tsypina I., Sakharov D. A. et al. BMC Systems Biology. 2019. Vol. 13. No. 19. P. 3-11.

A cancer cell line originating from human epithelial colorectal adenocarcinoma (Caco-2 cells) serves as a high capacity model for a preclinical screening of drugs. Recent need for incorporating barrier tissue into multi-organ chips calls for inclusion of Caco-2 cells into microperfused environment. This article describes a series of systems biology insights obtained from comparing Caco-2 models cells grown as conventional 2D layer and in a microfluidic chip. When basic electrical parameters of Caco-2 monolayers were evaluated using impedance spectrometry and MTT assays, no differences were noted. On the other hand, the microarray profiling of mRNAs and miRNAs revealed that grows on a microfluidic chip leads to the change in the production of specific miRNA, which regulate a set of genes for cell adhesion molecules (CAMs), and provide for more complete differentiation of Caco-2 monolayer. Moreover, the sets of miRNAs secreted at the apical surface of Caco-2 monolayers grown in conventional 2D culture and in microfluidic device differ.  When integrated into a multi-tissue platform, Caco-2 cells may aid in generating insights into complex pathophysiological processes, not possible to dissect in conventional cultures.

Pharmacoresistant epilepsy is a common neurological disorder in which increased neuronal intrinsic excitability and synaptic excitation lead to pathologically synchronous behavior in the brain. In the majority of experimental and theoretical epilepsy models, epilepsy is associated with reduced inhibition in the pathological neural circuits, yet effects of intrinsic excitability are usually not explicitly analyzed. Here we present a novel neural mass model that includes intrinsic excitability in the form of spike-frequency adaptation in the excitatory population. We validated our model using local field potential data recorded from human hippocampal/subicular slices. We found that synaptic conductances and slow adaptation in the excitatory population both play essential roles for generating seizures and pre-ictal oscillations. Using bifurcation analysis, we found that transitions towards seizure and back to the resting state take place via Andronov-Hopf bifurcations. These simulations therefore suggest that single neuron adaptation as well as synaptic inhibition are responsible for orchestrating seizure dynamics and transition towards the epileptic state.