The personality traits of Russian students do not have an overall significant impact on academic performance at the university. In the West, those who are more responsible, open and inclined to take risks turn out to be better students, Ekaterina Kochergina and Ekaterina Orel said at an academic seminar of HSE’s Centre for Institutional Studies.
Research&Expertise IQ research projects academic success
June 11, 2014

Commenting in the Blogosphere Has Elements of Being a Fan

Commenting on Live Journal is often concentrated around the most popular bloggers. Who authors the posts plays a more significant role in forming discussions than the subject matter. These are the conclusions of researchers at the HSE Laboratory of Internet Studies LINIS, Olessia Koltsova, Sergey Koltsov and Sergey Nikolenko.
Research&Expertise IQ research projects Internet
June 11, 2014

On June 5, research fellows at the HSE Laboratory for Comparative Social Research (LCSR) took part in the 3rd International Conference ‘Business Ethics and National Models of Behavior’, which was held at the Saint Petersburg State University of Economics and Finance.
Research&Expertise conferences & seminars Reporting an event corruption
June 11, 2014

Over the course of 20 years, since the beginning of contemporary medicine’s transition into a digital format, a vast amount of largely unused data has amassed. The analysis of these data and the extraction of a new logic of control from them is one of the most popular areas of focus in applied mathematics, Oleg Pianykh, Professor in HSE’s Department of Data Analysis and Artificial Intelligence and an Associate Professor at Harvard Medical School, said in a report. His report, 'Big Data in Medicine: How to Make them Work,' was presented at HSE’s academic seminar 'Mathematical Models of Information Technologies.'
Research&Expertise IQ research projects big data medicine
June 06, 2014 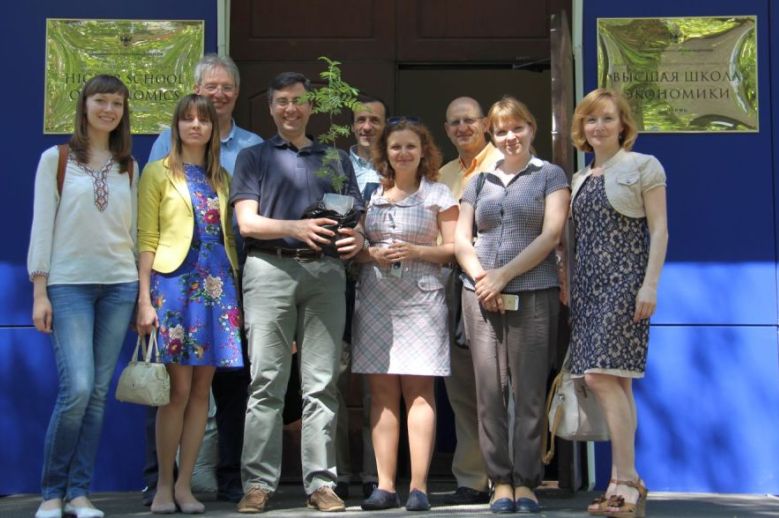 Professors have arrived from three foreign universities. The director of the laboratory, Angel Barajas will be spending about a month in Perm, and curators Felix Iturriaga, Fernandez-Jardon Fernandez and Dennis Coates, about two weeks.
Research&Expertise discussions research projects Reporting an event international laboratories
June 06, 2014

Russia's cooperation with China on a natural gas deal over the next few years will marginally improve Russia's economic performance and bring additional revenues, but is unlikely to offset the country’s sluggish economic growth rates, according to the recent issue of 'New Comments on the State and Business' published by the HSE Centre of Development Institute.
Research&Expertise IQ publications economics
June 04, 2014

Russians Do Not Believe in Success without Connections

Education and professional experience in reaching success are not as important for Russians as useful connections. It is specifically connections in the majority of people’s perception that play the main role in climbing the social ladder. Such mind-sets of the population do not allow for the national economy to grow or develop, the head of the Institute of Humanitarian Development of the Megapolis’ Center for Scientific Research and Education, Elena Avraamova, concluded during a research study presented at the HSE.
Research&Expertise IQ research projects career success
June 04, 2014

Many patients are dissatisfied with the health services they receive, but prepared to pay doctors extra for quality care. Doctors, in turn, consider it normal to receive cash or gifts from grateful patients. However, the line can be very thin between gratitude and extortion, according to a study by Alla Chirikova, Senior Research Fellow of the RAS Institute of Sociology, and Sergei Shishkin, Academic Supervisor of the HSE's Institute for Health Economics, published in the Universe of Russia journal.
Research&Expertise IQ research projects healthcare sociology
June 02, 2014

New Medicine Will Help the Public and the Economy

Russia will better be able to treat cancer, tuberculosis, HIV, strokes and heart attacks if it develops its own success stories in several medical fields of the future. Firstly, it is necessary to improve regenerative medicine, biomedicine, genomic research, the production of medicines that target specific health problems, and molecular diagnostics. It will otherwise be difficult to increase the life expectancy in the country and strengthen Russia’s position on the world market for medical technologies, Alexander Chulok says in an article published in HSE’s journal Foresight, 7(3), for 2013.
Research&Expertise IQ research projects medicine
June 01, 2014
1 ... 178 179 180 181 182 183 184 185 186 187 188 189 190 191 192 193 194 195 196 197 ... 231