‘Statistics Should Be Available and Comprehensible to Everyone’

Implementing a digital analytical platform, opportunities for Big Data, and other prospects for the development of Russian statistics were discussed by participants at a plenary session of the XX April International Academic Conference.
Research&Expertise HSE April Conference on Economic and Social Development statistics
April 12, 2019

In 2017, a downward trend was observed in reported crime, according to HSE's Demoscope Weekly, citing Rosstat. Last year, 2.16 million crimes were reported, which is 4.7% less than in 2016 and the lowest recorded statistic since 1992.
Research&Expertise IQ crime statistics
June 01, 2018

Entering the Big Data Era — Will Traditional Statistics Still Be in Demand?

The development of a national data management system, along with its architecture and ontology, is one of the key issues for a future cabinet, believes Maxim Akimov, First Deputy of the Chief of the Government Staff of the Russian Federation. A discussion at a panel session on data in the digital era at the XIX April International Academic Conference at HSE looked into the key challenges in regards to Russian statistics and possible responses to them.
Research&Expertise HSE April Conference on Economic and Social Development statistics
April 11, 2018

On February 23 and 24, the Institute for Information Transmission Problems of the Russian Academy of Sciences hosted the first international mini-conference entitled ‘New frontiers in high-dimensional probability and statistics’. The event was attended by Russian and international researchers in the field of statistical methods of analysis of multidimensional data and modern stochastic algorithms. The conference was hosted by HSE, the Institute for Information Transmission Problems of the RAS and Skoltech. Organisers included HSE Faculty of Computer Science staff, Vladimir Spokoiny, Alexey Naumov, Denis Belomestny and Quentin Paris.
Research&Expertise Reporting an event partnerships statistics
March 15, 2018

How Can Science Be Governed and Evaluated? 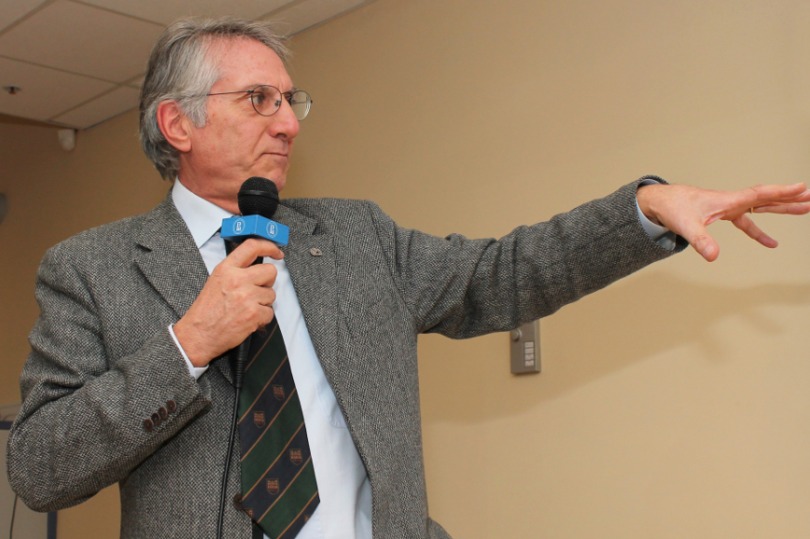 Can Everything in Science Be Measured?

Giulio Perani: ‘I am always very happy to meet students and researchers from the HSE’

On June 14, 2013 a visiting expert Giulio Perani delivered a lecture on 'Measuring Innovation beyond Enterprises: Options and Challenges' at the National Research University – Higher School of Economics (HSE). The event was organised by the HSE ISSEK Research Laboratory for Economics of Innovation.
Research&Expertise HSE guests economics statistics
June 18, 2013

HSE and the International Year of Statistics

This year HSE is taking part in the International Year of Statistics. We asked Vice Dean of the Faculty of Economics Alexey Ponomarenko to tell us about the events which are planned in connection with it, including those at the April Conference.
Research&Expertise HSE April Conference on Economic and Social Development statistics
February 18, 2013

Official statistics fail to capture – in fact, they simply ignore – the development of Russia’s high-tech industry. This distorts macroeconomic indicators and negatively impacts the quality of the government's decisions. Vladimir Bessonov, Head of HSE Expert Institute's Laboratory for Studies of Inflation and Economic Growth, has authored the report: 'In Search of Information and Communication Technologies: The Quirks of Russian Statistics and Economic Measurements'.
Research&Expertise IQ economic growth statistics
January 17, 2013

Science and Technology Indicators in the Russian Federation

The data book is the continuation of the series of publications on various aspects of S&T and innovation development in the Russian Federation. It presents statistical data reflecting the current state and trends in R&D and innovation. A specific chapter is devoted to international comparisons.
Research&Expertise innovation publications science and technology statistics
June 28, 2012
1 2