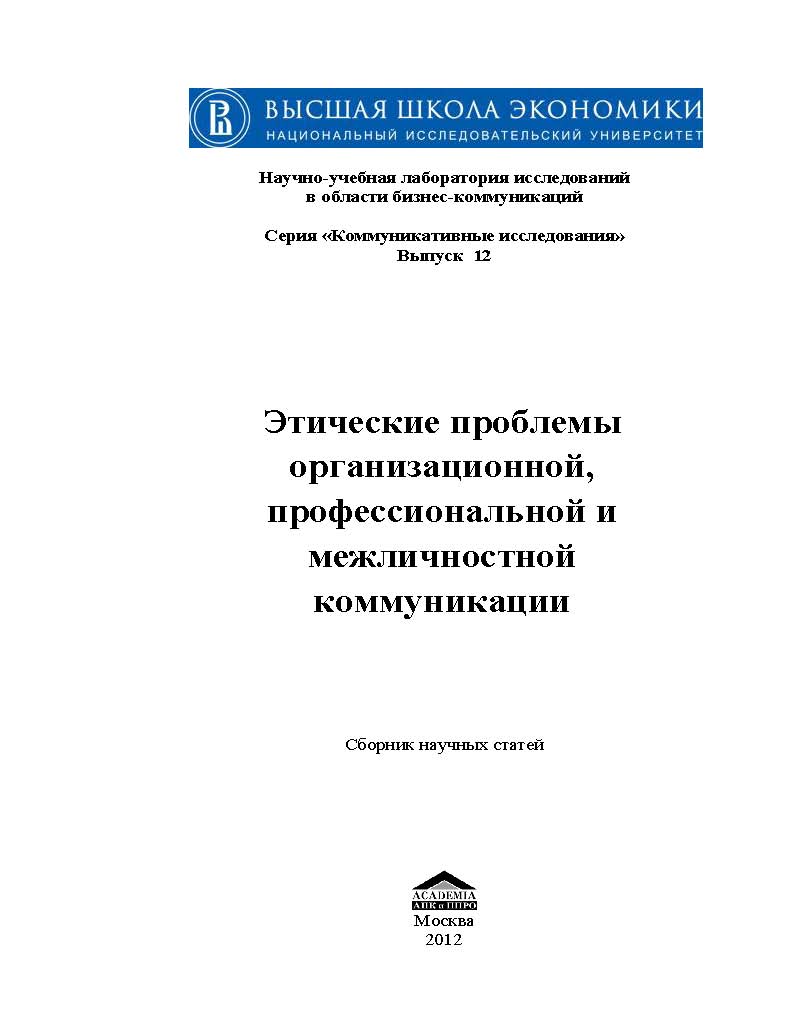 Этические проблемы организационной, профессиональной и межличностной коммуникации
Edited by: М. А. Пильгун Вып. 12. М.: АПК и ППРО, 2012.
Similar publications
Конструирование прошлого в процессе коммуникации: теоретическая логика социологического подхода
Филиппов А. Ф. Гуманитарные исследования. WP6. Высшая школа экономики, 2004. № 05.
The paper aims at elaborating a new approach to events as basic elements of the social. With this paper the author starts a new large project “Theory of social events”. Events are meaningful units observed as occurrences in space and time. The intervals of time and pieces of space both are indivisible for an observer, therefore containing no smaller events. However the events are interrelated, they have logical construction, implying both a number of other possible events and a kind of inner heterogeneity. Event are framed in situations and figurations, they can have a relativist and an absolute character for the observer and/or participants in social life. One kind of the logical implications they have is the past that must  have been for an event to occur. This is the logical structure of the argument proposed here.
Взаимодействие коротких однокомпонентных векторных солитонов в средах со смещенной дисперсией (адиабатическое приближение)
Громов Е. М., Морозов В. П., Тютин В. В. Труды НГТУ им. Р.Е. Алексеева. 2010. № 4 (83). С. 40-49.

The interaction of short single-component vector solitons in the frame of the coupled third–order nonlinear Schrodinger equations taking into account third–order linear dispersion, self–stepping, self–stimulated Ramanscattering, cross–stepping and cross–stimulated Raman-scattering terms is considered. Conditions of reflection and propagation of the solitons through each other and also the condition of oscillator interaction (vector breather) are obtained.

Within and Between-Country Value Diversity in Europe: Latent Class Analysis
Magun V., Rudnev M., Schmidt P. Sociology. SOC. Высшая школа экономики, 2012. No. 06/SOC/2012.
Country averages are the most popular instrument for studying cross-national variability of values, and within-country value diversity is rarely taken into consideration in such studies. Furthermore, traditional value indices only measure distinct value priorities, but do not allow researchers to grasp a system of value preferences. In order to find an alternative way to study within-country value diversity and cross-country differences, we employed latent class analysis (LCA). Respondents from the 33 European countries were classified on the basis of their responses to 21 items on the Schwartz Portrait Value Questionnaire. LCA resulted in six value classes. Five of these classes differ by their patterns of value preferences, and the particular feature of the largest class (38%) is the lack of any pronounced value preferences at all. The results showed that each of the 33 countries is internally diverse in its value class composition, and that most countries have representatives of all six value classes. At the same time, Nordic and Western European countries are substantively different from post-Communist and Mediterranean countries by their shares of various value classes. As a formal measure of within-country diversity we have used the value fractionalization index, which measures the evenness of membership distributions between classes. Nordic and Western European countries have higher fractionalization scores than post-Communist and Mediterranean countries. This means that value class distributions are more even in the Nordic and Western countries, which highlights the fact that higher fractionalization scores happen to coincide with country advancement. In Mediterranean and post-Communist countries, low value fractionalization means that the people are divided into unequal value majorities and value minorities, with a risk that the voices of minorities are not heard in the public space.
Этика бизнеса. Учебно-методическое пособие для студентов факультета экономики
Гриднева Е. А. Н. Новгород: Нижегородский филиал НИУ ВШЭ, 2010.
Теория организации. Курс лекций по дисциплине «Теория организации»
Гапонова О. С. Саарбрюкен: LAP LAMBERT Academic Publishing, 2011.
Язык как система ориентиров в социальном пространстве
Никитина Е. Б. В кн.: Информационно-коммуникационное пространство и человек (Материалы II международной научно-практической конференции 15-16 апреля 2012 г.). Пенза; М.; Витебск: Научно-издательский центр "Социосфера", 2012. С. 32-36.
The following article is an account of the author’s opinion of the role of language within the framework of society. The paramount idea is that language should not be viewed simply as a means of communication. The author suggests a more profound understanding of language as a medium between society and the culture against the background of which it manifests itself. The aforementioned conception of language provides the author with the opportunity to assert that language constitutes a system of guidelines without which society would lose its identity.
Исследование усиления в полосах пропускания и запирания замедляющих систем мощных ламп бегущей волны
Назарова М. В., Солнцев В. А., Колтунов Р. П. и др. T-Comm: Телекоммуникации и транспорт. 2012. № 10. С. 76-81.

The paper describes manipulation techniques we face in our everyday life, why manipulation works and how we can overcome it so that not to meet any negative consequences.

Свой среди других: антропология нормы в пространстве Царицынского парка
Самутина Н. В., Запорожец О. Н. Гуманитарные исследования. WP6. Высшая школа экономики, 2012. № 06.
The paper analyzes different forms of normative conduct in public space. Important general question about the production of space during everyday interactions broadly discussed in contemporary Urban Studies is complimented in this local anthropological case by different smaller levels of research showing the processes of establishment and changes of norms. Thus, the authors consider official rules and regulations in Tsatitsyno; regular practices of mass visitors; modes of everyday interaction at the park; micropractices of communication aimed to redefine the use and destination of places, and so on. The introduction to the problem of classification of “mass visitor” helps to correct some assumptions about the users of public space in contemporary Moscow.