The Two Invisible Cities of Europe

Augustine’s thought about the real presence of the Heavenly City, i.e. the community of saints in the salvation history, served as a model for the relationship of the Church and the state and played a decisive role in the political theology of the European Middle Ages. The projection of the Heavenly City on a historical plane formed, in turn, the image of the Christian people as a wandering people. Europe of nations, brought up in the ideology of Enlightenment, excludes the eschatological perspective from the construct of the nation-state, which becomes after the French Revolution the reference point of modernity along with national sovereignty and democratic legitimacy. One way or another, the European conservative reaction to the “ideas of 1789” at the turn of the 19th – 20th centuries was challenged to rethink the “Russoist” concept of nation, for which a variety of ideological resources were involved – from the theory of state of counter-revolution and political romanticism to various kinds of social Darwinist concepts. In this article, I’ll look at two examples of how the feeling of “dissatisfaction with modernity” (“das Unbehagen an der Moderne”, as the German historian O.-G. Oexle puts it), gets expression through an appeal to the so-called “mediaevalism”. 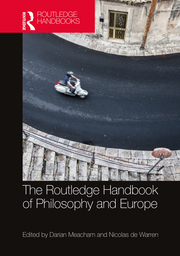