Political leadership as a form of expression of public expectations

Leaders often succeed each other in the course of an acute political struggle due to the organization of the country's political system. Therefore, no continuity of their political goals is usually possible. The only exception is the political organization of the society in which the leader has the opportunity to remain in office for a period of 10-20 years. The realization of really meaningful social goals is possible only at such terms measured by the life expectancy of generations of people.

Short-term performance of the political leader is a political reason for the fact that society develops spontaneously, randomly. Only the long-term functioning of the leader or the continuity of the political goals of successive leaders is the political basis for such social development when society itself manages its development. 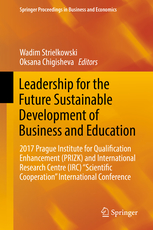 Discussing the major theories of political leadership with a focus on contemporary challenges that political leaders face worldwide, this research companion provides a comprehensive and up-to-date resource for an international readership. The editors combine empirical and normative approaches to emphasize the centrality of political culture, as well as the limits of culture and the universal demands of innovative adaptation.

The articles included in the collection allow us to consider the problems of the strategic development of the Russian Federation from legal, historical and theoretical, socio-humanitarian, educational and other aspects

The article contains the critical examination of Grinberg-Rubinfeld’s concept of economic sociodynamics (CES) and patronized goods from the position of liberal doctrines of the Austrian school. It reveals von Mises theory of history, where ideas occupy the central place and interests are pro-derivatives from them. It is shown that the notion of "public interest" is a dominant public opinion, which, of course, cannot exist as something separate from the individuals. Thus the holism inherent in CES is rejected. Public interest is not necessary represents something positive and ensuring progress. The public interest may be aimed against it. And outside public opinion it simply does not exist. Patronized goods with the exception of pure public goods become so not because they have need in the state, but because the state and interest groups need to take care of them. The state constrains free entrepreneurship, which only could provide efficient delivery of the most of the patronized goods. And the state is ineffective supplier of these goods. In general social liberalism from the perspective of the Austrian economic theory is presented as a new wave of statism

This article is dedicated to analysis and estimations of a place of the subjective public rights in the mechanism of maintenance of a mode of legality. Article contains the author's vision and understanding of legality, the actual problems connected with its maintenance.

There are significant variations in how healthcare systems and health professionals are regulated globally. One feature that they increasingly have in common is an emphasis on the value of including members of the public in quality assurance processes. While many argue that this will help better serve the public interest, others question how far the changing regulatory reform agenda is still dominated by medical interests.

Bringing together leading academics worldwide, this collection compares and critically examines the ways in which different countries are regulating healthcare in general, and health professions in particular, in the interest of users and the wider public. It is the first book in the Sociology of Health Professions series.

Democracy and Aristocracy in Ancient Athens: Deformation or Adaptation
Gushchin V. Humanities. HUM. Basic Research Programme, 2015. No. WP BRP 101/HUM/2015 .
The article analyzes the role of the aristocracy in democratic Athens, i.e. in the Vth Century B.C. What happened to the aristocracy in democratic Athens? Whether the aristocrats were able to adapt themselves to new social and political realities? It is suggested that there took place their division into democratic and aristocratic politicians, a separation of democratically-oriented leaders (prostates tou demou), who managed to adapt to democratic institutions. The political actions of prostatai had features of demagogy. Thus we can assume that such a phenomenon as demagogy appeared much earlier than previously thought. The other part of aristocracy was not alien to demagogy as well. Suffice it to mention the efforts made by Thucydides son of Melesias, who created a political hybrid, of an aristocratic hetaireia which did not shun demagogic techniques