To diagnose the logic of development and transformation of the principles of self-identification in the Russian youth environment the author conducted the research implemented in parallel in groups of bachelors of the first year of training and in groups of masters of the first year of training. The research included a series of stages, being limited to the scope of the article, the author highlights the first phase of the research devoted to the analysis of cognitive aspect of ethnicity through a closed questionnaire for recipients. The subsequent phases of the research are planned to diagnose affective aspects of ethnicity, and then the research will undergo religious principles of self-identification (in the same way). As the final stage of diagnostics there is a free associative experiment urged to verify the data obtained through the prism of a language picture of the world of participants.

The research was conducted in a number of universities in Moscow, the participants were selected by the method of continuous sampling on a voluntary basis. The nature of the selection of participants was defined by aspiration to localize an objective ethnoreligious structure of modern student’s groups. Parallel implementation of the research in groups of bachelors and masters allows to track the dynamics of self-identification bases under the influence of joint activities and common interests. 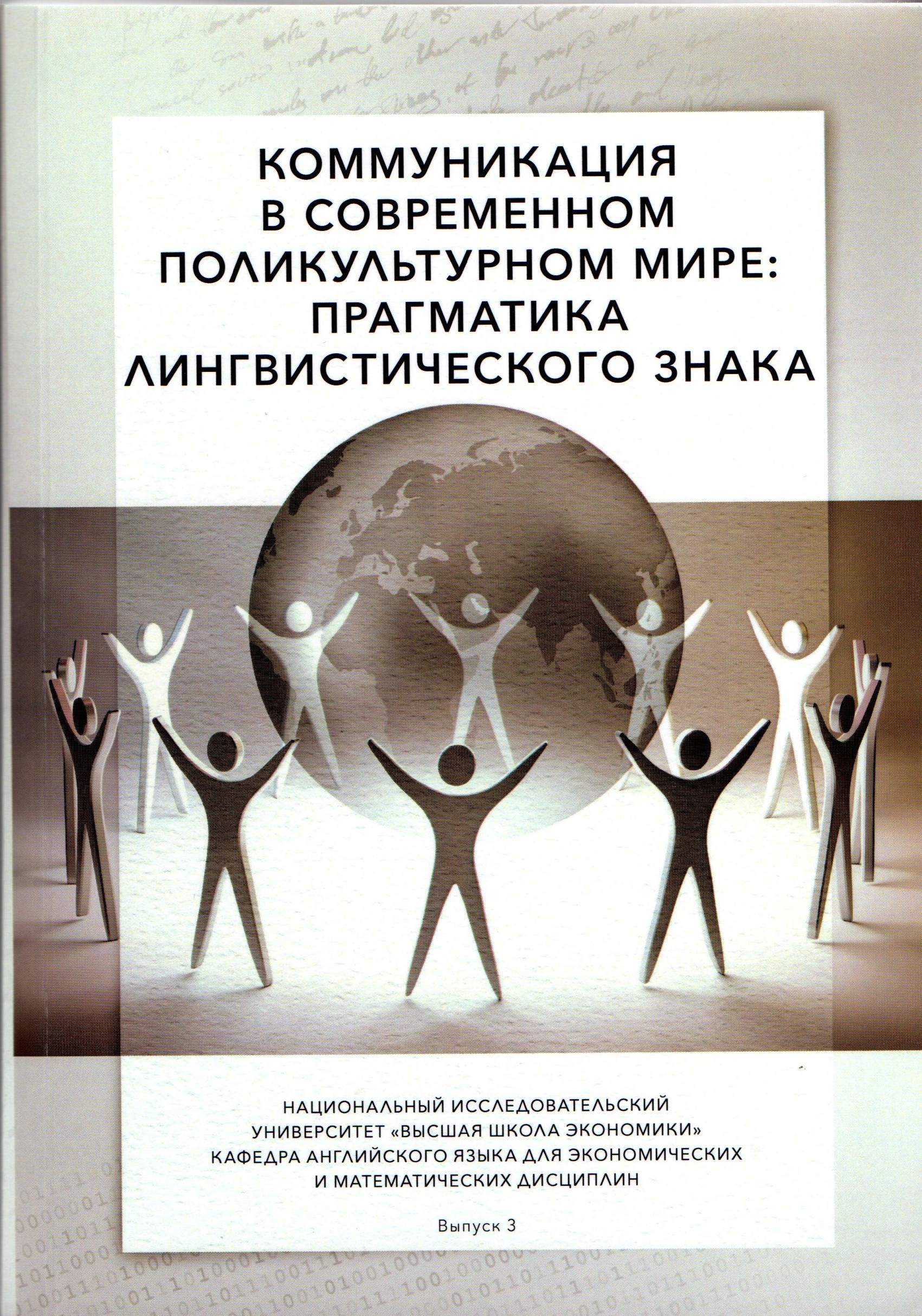 Коммуникация в современном поликультурном мире: прагматика лингвистического знака
Edited by: Т. А. Барановская Вып. 3. М.: Pearson Education Limited (российское представительство), 2015.
Similar publications
Nationalism in the USSR: A historical and comparative perspective
Scherbak A. N. Sociology. SOC. Высшая школа экономики, 2013. No. WP BRP 27/SOC/2013.
The late 1980s and early 1990s were characterized by the sudden rise of nationalist movements in almost all Soviet ethnic regions. It is argued that the rise of political nationalism since the late 1980s can be explained by development of cultural nationalism in the previous decades, as an unintended outcome of communist nationalities policy. Soviet political and cultural nationalism is studied in historical and comparative perspective. All ethnic regions are examined throughout entire history of the Soviet Union (49 regions, 1917-91), using the structural equation modeling approach. This paper aims to make at least three contributions in the field. Firstly, it is a methodological contribution for studying nationalism: a ‘quantification of history’ approach. Quantitative values are assigned to historical trends and events. Having constructed variables from historical data, I use conventional statistical methods like SEM. Secondly, this paper contributes to the theoretical debate about the role of cultural autonomy in multiethnic states. The results rethink the notion of ‘cultural autonomy’ as solution of interethnic conflict. Cultural nationalism matters, it indirectly reinforces political nationalism. In both cases concessions in the cultural domain has not stopped the growth of political nationalism in the late 1980-s. Finally, the paper statistically proves that the break between early Soviet and Stalinist nationalities policy explains the entire Soviet nationalities policy. In fact, the late Soviet nationalities policy was inherited from the Stalin’s rule period. This finding revealed in other studies now gets statistical evidence
Этнические процессы в глобальном мире
СПб.: Астерион, 2014.

The book deals with the problems of preservation and development of ethnic groups in the world today. Special attention is paid to ethnic identity in the context of globalization.

This book explores developments in the three major societies of the South Caucasus – Armenia, Azerbaijan and Georgia – focusing especially on religion, historical traditions, national consciousness, and political culture, and on how these factors interact. It outlines how, despite close geographical interlacement, common historical memories and inherited structures, the three countries have deep differences; and it discusses how development in all three nations has differed significantly from the countries’ declared commitments to democratic orientation and European norms and values. The book also considers how external factors and international relations continue to impact on the three countries.

This article traces the sources of allusions to the Byzantine Empire and the reasons for their presence in the writings of intellectuals and the press in 19th century Russia, outlining the major ideological and scholarly trends in which the Byzantine Empire was mentioned, referred or alluded to. The allusions or ‘echoes’ are analyzed in three contexts depending on the source type and the targeted audience: the writings of intellectuals, newspapers, and the declarations of war against Turkey. This three-layered analysis gives insights into the mechanisms of the Byzantine myth and the ways it worked within the structure of everyday life and the media. Ishow that Byzantine echoes were most present in the writings of intellectuals who attempted to give an outside overview of Russian geopolitics or historical development at the level of higher politics, including the opinions of foreign politicians.

Различение политического и политологического дискурсов об этничности. (Когнитивизм vs группизм как форма спора об универсалиях.)
Тульчинский Г. Л. В кн.: Этнические процессы в глобальном мире. СПб.: Астерион, 2014. С. 8-17.
Traditional and cognitivist approaches are not mutually exclusive. The first may help to clarify the actual or attributed to human differences and the second helps to explain how these differences are becoming increasingly important weight in specific contexts. They can not be seen as contradictory, but as directed mostly to different questions: one - in fact, as the thoughts and groups are created and maintained "folk sociology" and the other - on the functioning of groups in practical cooperation. In this case, even primordialism in understanding the nation appears quite cognitivist - not naturalistic analysis, and analysis of naturalization: that participants and analysts are not real primordialists as treat ethnicity as naturally given and unchangeable.
Социокультурная идентичность российской провинции
Кочеров С. Н. Credo new. 2014. № 4 (80). С. 149-157.
Summary: the article analyzes the question of the identity of the Russians basing on the study of preferences shown by residents of the Russian provinces. The article shows why nowadays the term "Russian" prevails over the concept of "Russian citizen". Social contradictions and the underdevelopment of civil relations lead to the dominance of ethno-cultural or regional identity over national-state identity. To become the national paradigm, the concept of the Russian world should be complemented with the latest version of the Russian idea.