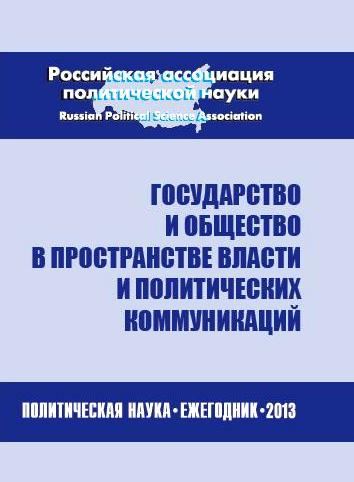 Государство и общество в пространстве власти и политических коммуникаций. Политическая наука. Ежегодник 2013
М.: РОССПЭН, 2013.
Similar publications
Идеологический автопортрет российского режима
Поляков Л. В. Русский журнал. 2009. № 17. С. 20-21.
Перспективы саммита «Группы восьми» 2008 г. в Тояко на острове Хоккайдо: ключевые вопросы будущего саммита
Киртон Дж. Вестник международных организаций: образование, наука, новая экономика. 2008. № 4. С. 11-38.
Предложения для стратегии участия Российской Федерации в «Группе двадцати», «Группе восьми» и БРИКС на период 2012-2014 гг.
Ларионова М. В. В кн.: Динамика развития «Группы двадцати», «Группы восьми», БРИКС и интересы России. Вып. 2. М.: Проспект, 2012. Гл. 1. С. 8-13.
Trajectories of Regime Transformation and Types of Stateness in Post-Communist Countries
Melville A. Y., Mironyuk M., Stukal D. Political Science. PS. Высшая школа экономики, 2012. No. 02.
It is commonplace that a sovereign state is a prerequisite to democracy. But not all states are alike, each having different resources, capacities, priorities, properties, and so forth. What kinds of states and what particular features are conducive to democracy or autocracy? How do different types of stateness and their dynamics relate to different trajectories of regime transformation in post-communist countries? In light of the significant debate in comparative politics regarding the importance of structural and procedural (actor-oriented) factors in democratization and democratic consolidation, we address the effect of stateness on regime transformations in a broad framework, allowing us to specify the role of structural conditions and the decisions of key political actors in post-communist regime change. The focus of this research is empirical, implementing a combination of qualitative comparative and multivariate statistical methods in order to study a sample of post-communist countries from the two past decades. This Working Paper is an output of a research project implemented as part of the Basic Research Program at the National Research University Higher School of Economics.
Опыт перехода стран Восточной Европы к демократии
Денчев К. София: Софийский университет Св. Климента Охридского, 1998.
Trial by Fire: a Natural Disaster’s Impact on Attitudes toward the Government in Rural Russia
Lazarev Y. A., Sobolev A. S., Soboleva I. V. et al. Political Science. PS. Высшая школа экономики, 2012. No. 04/PS/2012.
This study aims to explore the psychological foundations of political support under a nondemocratic regime by investigating the impact of a natural disaster on attitudes toward the government. The research exploits the enormous wildfires that occurred in rural Russia during the summer of 2010 as a natural experiment. Since wildfire spreads due to the direction of the wind, the local distribution of fire is as if random: one village may burn while the neighboring village is left unscathed. We test the effects of this exogenous variation with a survey of almost 800 respondents in randomly selected villages, 34 of which were burned and 36 of which were unburned, in the four regions of Russia that were most severely affected. Contrary to the conventional scholarly wisdom that suggests that natural disasters cause people to blame politicians, our study finds that in the burned villages there is higher support for the government at all levels, namely for the United Russia Party, the village head, the governor, Prime Minister Putin, and President Medvedev. Most counterintuitively, the rise of support for authorities cannot be fully explained by the generous governmental aid provided to the villages that were damaged by the fires. We interpret the results within the framework of system justification theory, developing it by adding to individual characteristics the factors of the political regime and the demonstration effect.
Особенности постсоветского политического режима
Паин Э. А. В кн.: Идеология «особого пути» в России и Германии: истоки, содержание, последствия. М.: Три квадрата, 2010. С. 266-294.
Политические трансформации в постсоветской Армении: проблемы адаптации и перспективы интеграции в современный мир
Балаян А. А. Ð¦ÐµÐ½ÑÑ Ð¸ÑÑÐ»ÐµÐ´Ð¾Ð²Ð°Ð½Ð¸Ð¹ Ð¼Ð¾Ð´ÐµÑÐ½Ð¸Ð·Ð°ÑÐ¸Ð¸. Ð¡ÐµÑÐ¸Ñ Ð¿ÑÐµÐ¿ÑÐ¸Ð½ÑÐ¾Ð². ÐÐ²ÑÐ¾Ð¿ÐµÐ¹ÑÐºÐ¸Ð¹ ÑÐ½Ð¸Ð²ÐµÑÑÐ¸ÑÐµÑ Ð² Ð¡Ð°Ð½ÐºÑ-ÐÐµÑÐµÑÐ±ÑÑÐ³Ðµ, 2012. â  М-29/12.
Есть ли модернизационный ресурс у идеологии "особого пути"?
Гудков Л. Д., Дубин Б. В., Паин Э. А. В кн.: Идеология «особого пути» в России и Германии: истоки, содержание, последствия. М.: Три квадрата, 2010. С. 300-317.
Waiting For Reform Under Putin and Medvedev
Urnov M., Gudkov L. D., Pain E. A. Basingstoke: Palgrave Macmillan, 2012.