Business Enlish practice tasks and texts for the development and mastering of Business English Vocabulary. 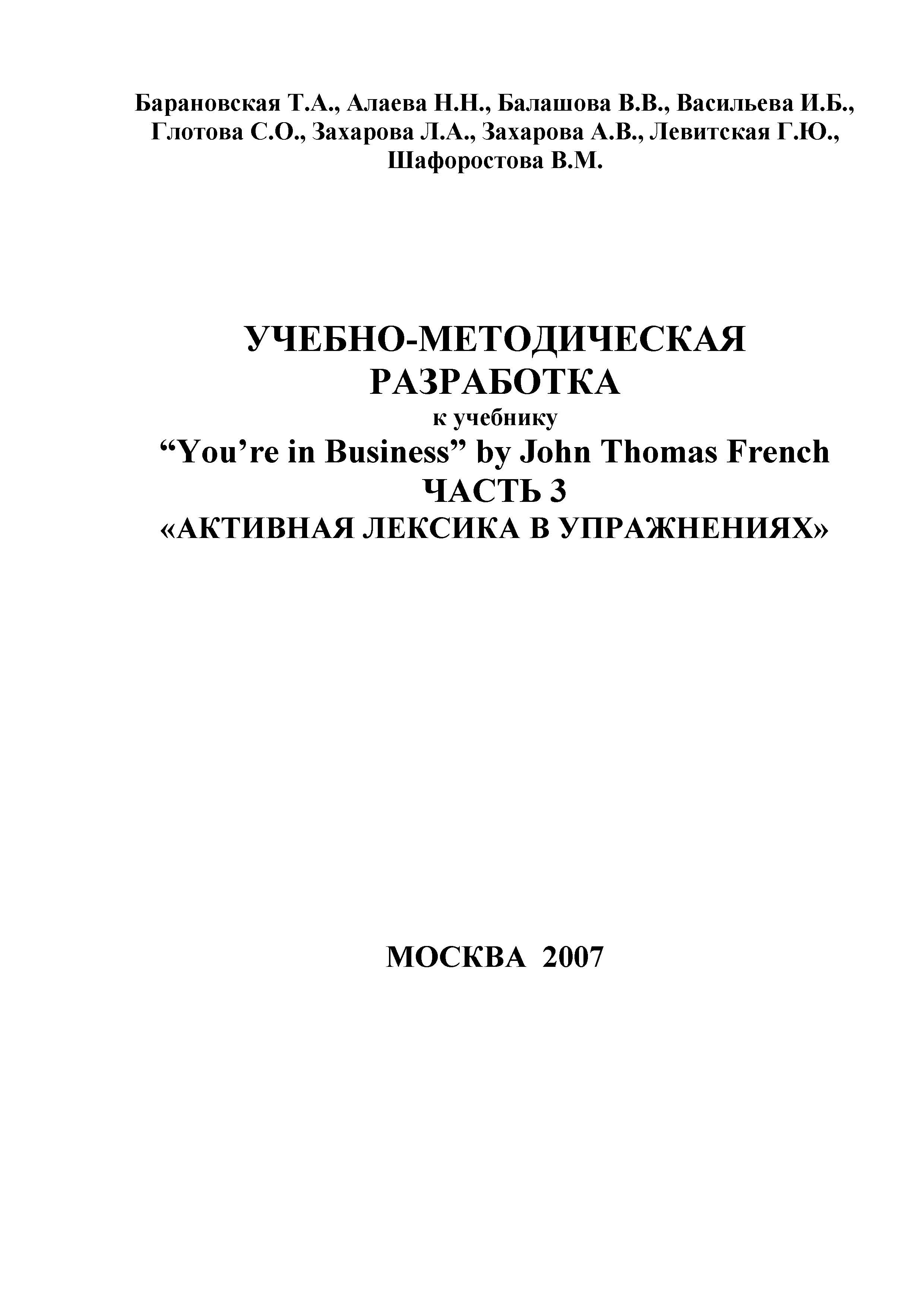 Forty years ago the analysis of “The Club of Rome’s” for the first time set the problem of the limited recourses on the world’s agenda. In 2004 the same authors conducted the recurring analysis showing that the global society has not only comprehended the problem but made attempts to resolve it more or less successfully. At the same time, the world crises of the last ten years demonstrated that the problem of sustainability is not limited to resources or ozone depletion. How can we think of a sustainable environment in a non-sustainable economy or society? Aren’t these two sorts of sustainability closely linked together? The answers could depend on many factors, among which we distinguish the influence of the corporations and managerial behavior on the modern world. So, the question is: How the corporations designed to be the pillars of stability and dynamic development influence on the sustainable development of the entirely society? This paper shows major fundamental trends of the corporal and societal development, the dynamic of the formation of the managerial class. We explore the internal contradiction of modern corporations, which in practice become (financial institutions in particular) a risk factor not only to their own stability, but also to the society as a whole. Our concept could lead to a more dynamic approach to corporate regulation. The solution to the problems described in this paper can be a key factor for further sustainable development as for corporations as well for the modern society.

The authors of this article compare the principles of financial (accounting) statements and its qualitative characteristics, provided by international and local accounting standards, assess their effect on the financial condition of the organization.

The Administered Public Recreation Marketing Concept
Novatorov E. V. Social Science Research Network. Social Science Research Network. SSRN, 2015. No. SSRN-id2656506.
The article focuses on four major assumptions that underlie the alternative conceptualization of public recreation marketing. It explains (1) the redistribution system within recreation resources are allocated; (2) the organizational structure of recreation agencies; (3) the ways in which public recreation agencies interact with local governments and citizens; and (4) the code of ethics and its influence on the behavior of recreation professionals. Finally, the article attempts to integrate these assumptions into an alternative definition of public recreation marketing that is termed “administered marketing.”
Building and developing customer relations in the emerging Russian market. The case of Finnish companies
Rozhkov A. Changing Europe Summer School. Research Centre for East European Studies at the University of Bremen, 2012
Current paper brings into consideration the issue of building and developing customer relations in emerging Russian market. Usually multinational companies enter Russian market and try to apply here their business solutions developed in mature markets. Many researchers argue that emerging markets require customer education rather than customer orientation. We develop a complex model of customer orientation and relationship development and test it on the Russian subsidiaries of Finnish construction companies. Qualitative study based on in-depth interviews with middle- and top-managers suggests that processes of customer relations differ dramatically from those established in European market.
Глава 1. Маркетинг-менеджмент – фундамент успешного бизнеса
Липсиц И. В. В кн.: МАРКЕТИНГ-МЕНЕДЖМЕНТ. Учебник и практикум для бакалавриата и магистратуры. М.: Юрайт, 2015. С. 13-34.
Анализ влияния системы учета на финансовое состояние организации (на примере основных средств)
Ковина А. К. Современные научные исследования и инновации. 2012. № 11.
Business English II: учебно-методическое пособие по деловому английскому языку
Gridneva N. N. St. Petersburg: OOP, 2011.
This study guide, being a logical continuation of the book by N.Gridneva and S.Solntsev ‘Business English’, is for the students of non-linguistic departments who study Business English. Its structure consists of several sections including a text on one of the five topics, a series of pre- and after-reading tasks on its understanding, and also a range of various vocabulary and grammar exercises. This book helps students work on the topics more profoundly either in class or all by themselves. Besides, it can be also useful for all people studying Business English.
The Model of Contemporary Marketing Practices (CMP) in the Russian Market: Evidence from Empirical Research
Vera A. Rebiazina, Olga A. Tretyak. Management. MAN. Высшая школа экономики, 2014. No. WP BRP 21/MAN/2014.
Previous research has shown that emerging markets represent a significant part of the world economy and are expanding their share. However, they are still not well examined in the marketing field. Russia is especially neglected in the academic discussion of overall marketing strategy. Previous research indicates that the model of “Contemporary marketing practices” (CMP) is commonly used as a classification scheme of marketing practices both in developed and developing markets. This article examines how “Contemporary marketing practices” (CMP) works in Russia and tests the CMP model in the Russian market to reveal what types of marketing practices (transactional marketing, database marketing, interactive marketing, network marketing and relationship marketing) are most often used by Russian companies. The article is based on a quantitative study of 329 Russian companies and includes a cluster analysis that shows that types of marketing practices are common for the Russian market. Empirical results of cluster analysis shows that basic marketing practices are widely found in emerging Russian market though their characteristics differ dramatically from those on developed markets.
Развитие современного информационного пространства: анализ и перспективы
Дзялошинский И. М., Пильгун М. А., Тощева А. В. и др. Вып. 11. М.: АПК и ППРО, 2012.
Технологии работы с текстовой и фактографической информацией. Словарь-справочник
Шаров А. Г. МегаВерсия, 2007
Эффективные стратегии и тактики в современных коммуникационных процессах
Edited by: М. А. Пильгун Вып. 10. М.: АПК и ППРО, 2012.
Boris Pasternak: Russian Writer in Italy
Galatenko Y. N. Academic Journal of Interdisciplinary Studies. 2013. Vol. 2. No. 9. P. 304-309.