The monograph gives a solid representation of major problems of the Russian foreign policy in an environment of controversial processes of globalization, the state and prospective of modern international relations and world politics. Analysis of the development of the new world order, and role and place of Russia in this new world. Characterization of an optimal strategy for Russia at the current state of affairs. Formulation of the main parameters of Russian identity in the dimension of foreign relations, which should make Russia competitive in the postindustrial architecture of the modern world. 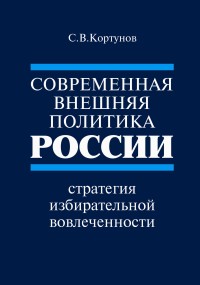