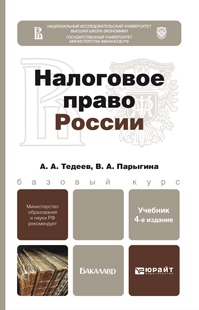 Налог на игорный бизнес
Хрешкова В. В. В кн.: . Гл. 11. С. 272-312.
Учет расходов
Макарова Л. Г. В кн.: Бухгалтерский финансовый учет. М.: Вузовский учебник , 2010. Гл. 14. С. 425-469.
Налогообложение капитала и поиск ренты
Arefiev N., Барон Т. Ю. Научные доклады лаборатории макроэкономического анализа. WP12. Высшая школа экономики, 2007. No. 07.
We find optimal capital income tax rate in an imperfectly competitive economy, where some part of recourses is devoted to rent-seeking activity. Optimal tax offsets the difference between marginal social and marginal private return to capital, which is a result of rent seeking, and the difference between the before tax interest rate and the marginal productivity of capital, which arises from imperfect competition. Optimal capital income tax rate depends neither on other tax rates nor on overall tax burden. Numerically it is close to zero.
From Competition to Dominance: Political Determinations of Federal Transfers in Russian Federation
Marques II I., Nazrullaeva E., Yakovlev A. A. Economics. EC. Высшая школа экономики, 2011. No. 12.
The recent uprisings in the Middle East have cast doubt on the degree to which existing theories of autocracy can correctly identify which groups threaten the autocrats rule at any given time. As a result, these theories are unable to predict fundamental upheavals in established autocracies. Who is the biggest threat to the autocrat, though, the elite or the populations as a whole? In this paper, we evaluate how autocrats respond to perceived threats from the population and elites. We advance the argument that elites with autonomous power resources – economic assets, connections to regional elite networks, etc. – and swing voters, who are easily co-opted to cause problems for the regime, are likely perceived as the greatest threats. We also argue that to the extent that economic growth generates support for the incumbent, in this case the autocrat, actors in areas with high growth will, all else equal, be perceived as posing less of a threat to the autocrat than those in slow growth areas. We assume autocrats put their money where their mouths are and test our argument using the combination of data on federal-regional transfers in the Russian federation between 2001 and 2008 and a novel dataset of regional executive level characteristics. We find limited support for our arguments. On the one hand, transfers do go to politically powerful governors, while growth diminishes the impact of measures of voters preferences on transfers. On the other hand, we find evidence that transfers were aimed towards core, not swing voters, and that powerful regional elites tended to get more transfers, not less, in fast growing regions.
The Legitimacy of the Bolshevik Order, 1917-1918: Language Usage in Revolutionary Russian Law
Borisova T. Y. Law. LAW. Высшая школа экономики, 2012. No. 05.
The article describes and analyzes the legislative politics of revolutionary regimes in Russia in 1917-1918. The author aims to demonstrate the political meaning of the form of early Soviet legislation and its legitimizing effect. The revolutionary legislators often used specific language in the new laws as a vehicle of legitimacy, i.e. to make the people comply. The two main types of legal language used by the Bolsheviks can be interpreted from the perspective of different types of legitimacy. The revolutionary strategy used propagandistic legislation, written in the language of lay people, which urged them to act according to the new law. It can be seen as a request for acts of the people to legitimize the soviets. On the contrary, the traditional strategy employed old bureaucratic means of writing and distributing legislation to the local soviets. The language used by this strategy was closed to the understanding of a lay audience and implied traditions of obeying the law written in familiar legal language, which in turn implied rational/legal legitimacy. The second strategy had already become dominant after the first months of the Bolshevik revolution. This observation demonstrates that from the very beginning of their rule, Soviet leaders approached legislative policy from a technocratic point of view, which determined the further development of Soviet legal theory and practice.
Актуальные проблемы истории и права
Edited by: В. А. Лабузов Оренбург: Оренбургский государственный институт менеджмента, 2011.
Правовое обеспечение единой государственной экологической политики Российской Федерации
Edited by: С. А. Боголюбов, Н. И. Хлуденева М.: Юстицинформ, 2011.
Право на контрдемонстрации: угроза или индикатор уровня демократии?
Храмова Т. М. Конституционное и муниципальное право. 2012. № 7. С. 10-16.