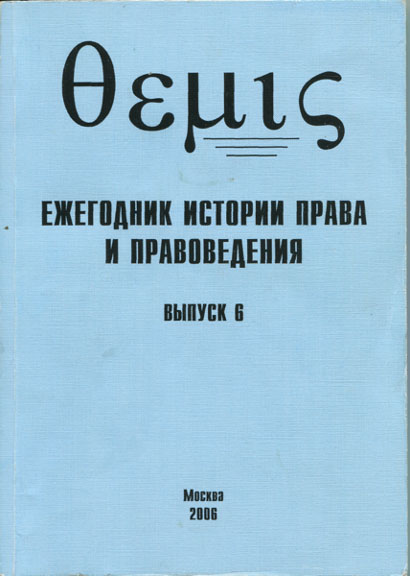 This article addresses the question of  philosophy and political program of contemporary Russian conservatism. The author analyses historical origins of this doctrine and the role of conservative romanticism in a framework of the current political process. From this position the author focuses on comparative analysis of Russian and West European forms of phenomenon under consideration.

Экономические и социальные аспекты российского конституционализма
Вып. 4. М.: ТЕИС, 2009.
The Legitimacy of the Bolshevik Order, 1917-1918: Language Usage in Revolutionary Russian Law
Borisova T. Y. Law. LAW. Высшая школа экономики, 2012. No. 05.
The article describes and analyzes the legislative politics of revolutionary regimes in Russia in 1917-1918. The author aims to demonstrate the political meaning of the form of early Soviet legislation and its legitimizing effect. The revolutionary legislators often used specific language in the new laws as a vehicle of legitimacy, i.e. to make the people comply. The two main types of legal language used by the Bolsheviks can be interpreted from the perspective of different types of legitimacy. The revolutionary strategy used propagandistic legislation, written in the language of lay people, which urged them to act according to the new law. It can be seen as a request for acts of the people to legitimize the soviets. On the contrary, the traditional strategy employed old bureaucratic means of writing and distributing legislation to the local soviets. The language used by this strategy was closed to the understanding of a lay audience and implied traditions of obeying the law written in familiar legal language, which in turn implied rational/legal legitimacy. The second strategy had already become dominant after the first months of the Bolshevik revolution. This observation demonstrates that from the very beginning of their rule, Soviet leaders approached legislative policy from a technocratic point of view, which determined the further development of Soviet legal theory and practice.
Политические режимы Средней Азии: конституционные реформы в рамках авторитарной модернизации
Медушевский А. Н. Сравнительное конституционное обозрение. 2012. № 4. С. 45-60.

Rethinking the standard theory of democratic transition the author shows the uneven character of Central Asian political regimes. He sketches different strategies of political modernization in order to represent the impact of Post-Soviet constitutional reforms regarding such items as separation of powers, parliamentarism, presidential power and the role of political leadership. He discusses the importance of constitutional developments for traditional societies in transition, and concludes that post-communist constitutional development in the region is still far from complete.

Consensus or Constitution? - A Conceptual Perspective on the Legitimacy of Constitutional Courts in Consociations
Gál A. OxonCourts Judicial Studies Graduate Colloquium. OxonCourts Judicial Studies Graduate Colloquium. University of Oxford, 2019
The role of constitutional courts in consociational democracies has become an emerging topic in the literature on consociationalism, following the field’s decades-long focus on parties, legislatures and executives. As most of these works have been dedicated to the role constitutional courts in the dynamics of these regimes, little attention has been paid to questions asked about other constitutional courts, like their perceptions of legitimacy, counter-majoritarian character, or sources quoted in their decisions. Investigating consociations from the perspective of constitutionalism is particularly challenging due to the tension between the fundamental logics of the two concepts: while consociationalism is based on the dynamic cooperation and compromise between political elites, adherence to certain principles which are not subjects of political contestation is a fundamental element of constitutionalism. This paper focuses on the legitimacy of constitutional courts in consociations, building on the empirical results of my ongoing PhD dissertation project which deals with these institutions from the normative angle of constitutionalism. On the one hand, the ‘input legitimacy of these constitutional courts is analysed considering both the peculiarities of their design as well as their institutional environment. On the other hand, by addressing the ‘output’ legitimacy of these courts, judicial decisions linked to the power-sharing settlements of Belgium, Bosnia and Herzegovina and Northern Ireland are analysed with a particular emphasis on how the respective bodies balance between textual and normative readings of their constitutions. On a normative level, I argue that the necessity of constitutional review in these regimes can be best understood through the analytical framework of Thomas Christiano’s democratic theory, with its particular emphasis on special, outstanding groups labelled as ‘persistent minorities’. From an empirical perspective, the case record of these courts primarily demonstrates their primary willingness to interpret constitutions through the framework agreements including them, implying a functional approach to legitimisation.
Power and Legitimacy- Challenges from Russia
L.; NY: Routledge, 2013.

The preface to the translation of "Politics" by C. Schmitt. Schmitt in 1933-36 aspired (though rather unsuccessfully) to become an ideological guru of the Nazi regime, that was only in the process of formation then. It allows to formulate the question about the guilt of the thinker, but doesn't prevent to find the theoretical contents in his works of this period. Criticism of parliamentary democracy and understanding the political as an opposition of enemies lead Schmitt to the concept of a tripartite political unity of people, state and movement. He sees the Nazi regime as a new kind of politics based not on struggle, but on mobilization of the people conducted by the Führer. This design turned out to be not only politically vicious, but also theoretically defective, however its studying is an instructive experience.