In recent years, the physics community has experienced a revival of interest in spin effects in solid state systems. On one hand, the solid state systems, particularly, semiconductors and semiconductor nanosystems, allow us to perform benchtop studies of quantum and relativistic phenomena. On the other hand, this interest is supported by the prospects of realizing spin-based electronics, where the electron or nuclear spins may play a role of quantum or classical information carriers.

This book looks in detail at the physics of interacting systems of electron and nuclear spins in semiconductors, with particular emphasis on low-dimensional structures. These two spin systems naturally appear in practically all widespread semiconductor compounds. The hyperfine interaction of the charge carriers and nuclear spins is particularly prominent in nanosystems due to the localization of the charge carriers, and gives rise to spin exchange between these two systems and a whole range of beautiful and complex physics of manybody and nonlinear systems. As a result, understanding of the intertwined spin systems of electrons and nuclei is crucial for in-depth studying and controlling the spin phenomena in semiconductors.

The book addresses a number of the most prominent effects taking place in semiconductor nanosystems including hyperfine interaction, nuclear magnetic resonance, dynamical nuclear polarization, spin-Faraday and spin-Kerr effects, processes of electron spin decoherence and relaxation, effects of electron spin precession mode-locking and frequency focussing, as well as fluctuations of electron and nuclear spins. 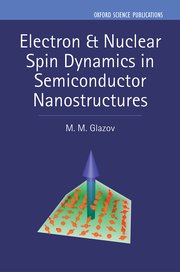