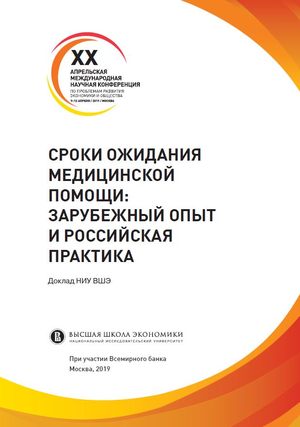 The collective monograph presents the scientific research of important legal and economic problems of social security, also is given the analysis of the current situation in the sphere of social security, its development is estimated and predicted, solutions of the existing problems are offered.

this article is devoted to the provision of medical confidentiality

Правовые и криминалистические аспекты деятельности в сфере оказания медицинской помощи: вопросы теории и практики
Берзинь О. А., Погодина Т. Г. Н. Новгород: 2014.
Особенности исследований в психологической, педагогической практике и социальной работе. Международная научно-практическая конференция. IX Левитовские чтения. Сборник материалов
М.: Издательство МГОУ, 2014.
6-th Satellite Symposium on Neuropsychological Rehabilitation, Tallinn, Estonia, August 3-4, 2009
Tallinn: 2009.
From salary to the performance-based remuneration of russian physicians: how motivation at work is changing.2018. - 25 с.
Shishkin S., Temnitsky A. Public and Social Policy. WP BRP Series. НИУ ВШЭ, 2017
The paper examines the changes in the physician’s motivation at work during the period of reforms the salary system started since 2008. These reforms have included a shift from fixed salary system to pay for performance remuneration as well as sufficient increase of salary. The data of six surveys of health workers implemented in 2007-2016 were used to reveal the hierarchy of physician’s motives at work and to track their changes during the period of time under consideration. The changes were minor, and the directions of these changes were rather opposite to the expected strengthening of financial motivation at work: the importance of the motive of earning money has moved from the first place. The share of doctors willing to work more and better on the condition of linking salary with labor contribution did not increase. In contrast, almost two-thirds of physicians believe that they are working on a high level of quality and performance. The majority of physicians desire to increase not a stimulating part of the salary but a base, fixed one. Doctors who receive bonuses for the intensity, quality and performance, and who have a higher amount of salary wish to see the share of fixed part of salary higher than it is now available. This is a clear indication of orientation of this professional to strengthening the protective function of the salary rather than to use increased opportunities for earning money.
Studies in Big Data
Vol. 65: Data Management and Analysis. Switzerland: Springer, 2019.