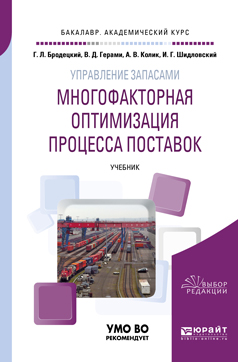 It is developed and presented an approach to inventory management EOQ-model optimization in this paper taking into the deferrals provided for the order cost payments. They summarize the results for the traditional EOQ-models taking into account the deferrals of payments which relate to payment of the batch of goods, with the payment of storage costs, and of the delivery costs payment. Presented modifications of EOQ-formulas will allow for managers to while considering the above features also to take into account he specificity costs of storage charging, in the form of rent, and for the used place on stock, to improve the decisions on the organization of the supply chain quality.

THE PRACTICE OF BUSINESS AND IT INTEGRATION IN THE TRANSPORT COMPANY USING ENTERPRISE ARCHITECTURE FRAMEWORK
Dorofeev A., Курганов В. М. In bk.: Proceedings of the 7th International Conference on Operations and Supply Chain Management (Phuket, 18-21 December, 2016). Phuket: 2016. P. 377-392.

Supply Chain Management in modern conditions requires close integration of business processes of transport companies and information technology. We know that today there are a large number of applications and information systems for the automation of logistics activities. Currently there is no complete and consistent classification of software products of the Transportation Management System (TMS). Their diversity is relevant in the context of the fourth industrial revolution ("Industry 4.0"). It's difficult to navigate existing and emerging information systems and choose the most appropriate. The most important class TMS products are designed to plan, organize, and account for the operation of the vehicle fleet. However, their practical use is often ineffective for several reasons. One of the common problems in the implementation of the information system is the lack of or inadequate investigation of all operating activities of the enterprise and its strategic position in the market, the analysis of information flows, evaluation of employees of business roles, mechanism of decision-making. The reason for this is the lack of logistics management competencies in the field of information technology, and on the other hand, often poor understanding of IT-managers of the transport processes. Therefore, a practical approach synchronization strategic goals, objectives, business processes, supply chain management with business logic implemented information system. The paper discusses the use of proper Zachman enterprise architecture framework as this approach. This proper framework is simple enough to understand, and is known for a long time in the IT industry. Therefore, its use in the development of the information supply chain management system in practice, it seems appropriate for small and medium-sized freight enterprises. It is known that the business processes of all transport companies in general are often very similar. However, in practice often requires a flexible adaptation of the information system for each of them.

The authors propose new approach to self-organization of complex distributed systems in logistics. That approach is based on combination of multi-agent paradigm with constraint satisfaction techniques. The proposed solution expresses major features of Swarm Intelligence approach and replaces traditional stochastic adaptation of the swarm of the autonomous agents by constraint-driven adaptation.