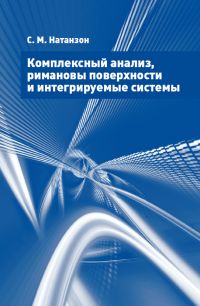 Similar publications
Информационная технология моделирования механических процессов в конструкциях радиоэлектронных средств
Кофанов Ю. Н., Новиков А. С., Шалумов А. С. М.: Радио и связь, 2000.
Loop groups, Clusters, Dimers and Integrable systems
Marshakov A., Fock V. arxiv.org. math. Cornell University, 2014
We describe a class of integrable systems on Poisson submanifolds of the affine Poisson-Lie groups PGLˆ(N), which can be enumerated by cyclically irreducible elements the co-extended affine Weyl groups (Wˆ×Wˆ)♯. Their phase spaces admit cluster coordinates, whereas the integrals of motion are cluster functions. We show, that this class of integrable systems coincides with the constructed by Goncharov and Kenyon out of dimer models on a two-dimensional torus and classified by the Newton polygons. We construct the correspondence between the Weyl group elements and polygons, demonstrating that each particular integrable model admits infinitely many realisations on the Poisson-Lie groups. We also discuss the particular examples, including the relativistic Toda chains and the Schwartz-Ovsienko-Tabachnikov pentagram map.
Крестьянство Белгородской области в 2000–2013 гг.: комплексный анализ развития хозяйственной деятельности и социальной организации сельской жизни
Эфендиев А. Г., Сорокин П. С. В кн.: XV апрельская международная научная конференция по проблемам развития экономики и общества: в 4-х книгах. Кн. 4. М.: Издательский дом НИУ ВШЭ, 2015. С. 168-177.
Graph potentials and moduli spaces of rank two bundles on a curve
Galkin S., Belmans P., Mukhopadhyay S. arxiv.org. math. Cornell University, 2020. No. 2009.05568.
We introduce graph potentials, which are Laurent polynomials associated to (colored) trivalent graphs. These graphs encode degenerations of curves to rational curves, and graph potentials encode degenerations of the moduli space of rank 2 bundles with fixed determinant. We show that the birational type of the graph potential only depends on the homotopy type of the colored graph, and thus define a topological quantum field theory. By analyzing toric degenerations of the moduli spaces we explain how graph potentials are related to these moduli spaces in the setting of mirror symmetry for Fano varieties.  On the level of enumerative mirror symmetry this shows how invariants of graph potentials are related to Gromov-Witten invariants of the moduli space. In the context of homological mirror symmetry we formulate a conjecture regarding the shape of semiorthogonal decompositions for the derived category. Studying the properties of graph potentials we provide evidence for this conjecture. Finally, by studying the Grothendieck rings of varieties and categories we will give further geometric evidence.
Towards a bihamiltonian structure for the double ramification hierarchy
Buryak A., Rossi P., Shadrin S. math. arxive. Cornell University, 2020
We propose a remarkably simple and explicit conjectural formula for a bihamiltonian structure of the double ramification hierarchy corresponding to an arbitrary homogeneous cohomological field theory. Various checks are presented to support the conjecture.
Вещественно-нормированные дифференциалы и гипотеза Арбарелло
Кричевер И. М. Функциональный анализ и его приложения. 2012. Т. 46. № 2. С. 37-51.

Using meromorphic differentials with real periods, we prove Arbarello's conjecture that any compact complex cycle of dimension g−n in the moduli space M_g of smooth algebraic curves of genus g must intersect the locus of curves having a Weierstrass point of order at most n.

A Poisson structure is defined on the space W of twisted polygons in R^\nu. Poisson reductions with respect to two Poisson group actions on W are described. The \nu=2 and \nu=3 cases are discussed in detail. Amongst the Poisson structures arising in examples are to be found the lattice Virasoro structure, the second Toda lattice structure, and some extended Toda lattice structures. It is shown that, in general, for any \nu, the reduction procedure gives rise to a family of bi-Hamiltonian structures on the reduced space.