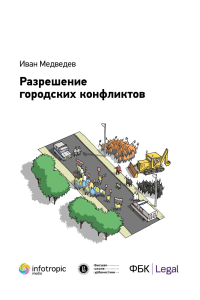 The volume challenges the prevailing simplistic view of weak, passive, and scared citizens in Eastern European and Eurasian cities – places that are themselves often seen as shaped by neoliberal and authoritarian structures. Here, the editors argue for the vibrant diversity and dynamism in contemporary urban civic activism in Eurasia. Employing diverse sources such as photos, interviews with local activists, and scholarly reports from the fields of anthropology, planning, architecture, political sciences, and sociology, they explore the creativity and novelty of Eurasian grassroots activism. By drawing on these multi-disciplinary perspectives, they aim to overcome distances and initiate dia­logues among the interested public, activists, urban decision makers, and academics in the East and West alike.

Вопросы модернизации процедуры рассмотрения экономических споров в арбитражных судах
Прокудина Л. А. Предпринимательское право. 2012. № 4. С. 27-30.
The Legitimacy of the Bolshevik Order, 1917-1918: Language Usage in Revolutionary Russian Law
Borisova T. Y. Law. LAW. Высшая школа экономики, 2012. No. 05.
The article describes and analyzes the legislative politics of revolutionary regimes in Russia in 1917-1918. The author aims to demonstrate the political meaning of the form of early Soviet legislation and its legitimizing effect. The revolutionary legislators often used specific language in the new laws as a vehicle of legitimacy, i.e. to make the people comply. The two main types of legal language used by the Bolsheviks can be interpreted from the perspective of different types of legitimacy. The revolutionary strategy used propagandistic legislation, written in the language of lay people, which urged them to act according to the new law. It can be seen as a request for acts of the people to legitimize the soviets. On the contrary, the traditional strategy employed old bureaucratic means of writing and distributing legislation to the local soviets. The language used by this strategy was closed to the understanding of a lay audience and implied traditions of obeying the law written in familiar legal language, which in turn implied rational/legal legitimacy. The second strategy had already become dominant after the first months of the Bolshevik revolution. This observation demonstrates that from the very beginning of their rule, Soviet leaders approached legislative policy from a technocratic point of view, which determined the further development of Soviet legal theory and practice.
Urban activism and citizenship under Post-soviet conditions: the Muscovites’ struggle for public space
Fröhlich C. In bk.: Urban Activism in Eastern Europe and Eurasia. Berlin: DOM publishers, 2020. P. 67-71.
Виртуальные сообщества жителей многоквартирных домов в социальной сети vk.com
Воскресенский В. М. В кн.: Социология в действии — 2015. Избранные материалы VII социологической межвузовской конференции студентов и аспирантов. СПб.: Отдел оперативной полиграфии НИУ ВШЭ – Санкт-Петербург, 2015. С. 152-156.

In this paper we explore the main patterns of communication of apartment buildings’ residents in St. Petersburg on social networking site “VK”. Using Latent Dirichlet Allocation (LDA), we discovered discussion topics in online groups created by residents for their houses. We find that online communication in these groups has instrumental character and is aimed at solving common problems of residents. Apart from that, co-membership analysis showed that participants of groups created for fighting with in-fill constructions are more involved in various citywide activities than participants of groups created for solving internal problems of house (e.g. unsatisfactory work of the management company or leaking ceilings).