From Ancient Manuscripts to ModernDictionaries: Perspectives on Linguistics and Ancient Languages

Piscataway: Gorgias Press, 2017.
Yampolskaya S.
Academic editor: L. Tarsee, K. Dyer.
Under the general editorship: T. C. Falla.
The article at hand aims to demonstrate the development of internationalloanword adaptation in Early Modern Hebrew based on Hebrew presspublished in Russia during the period from the 1860s to the 1910s. In theperiod, various languages from both Eastern and Western Europe wereenriched by internationalisms. For Hebrew, the challenge was even morecomplex, since in that same period Hebrew was undergoing languagemodernization that is referred to by various terms in scholarly use – reviv-al, revitalization, revernacularization, relexification and others. I intend toshow that most trends in the area of loanword adaptation had beenformed by the 1910s in European Hebrew. The image of language changethat is reflected by the sources I use contradicts both traditional and revi-sionist general theories on Israeli Hebrew emergence.
Research target: Philology and Linguistics
Priority areas: humanitarian
Language: English
Full text (PDF, 1.35 Mb)
Sample Chapter (PDF, 1.35 Mb)
Text on another site
Keywords: Ashkenazic HebrewHebrewnewspaper HebrewMaskilic Hebrewhistory of Hebrew 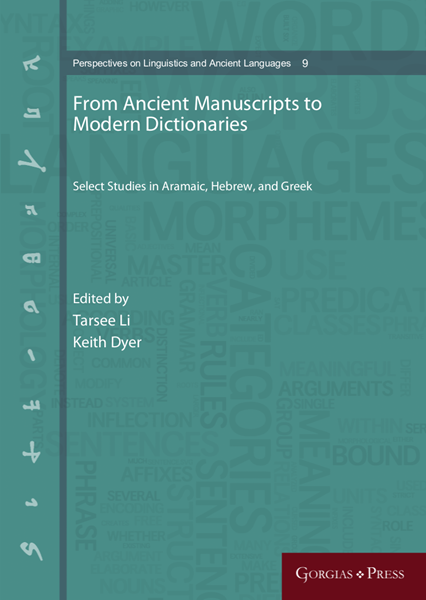 This paper examines the problematic concept of dead language as exemplified by the Hebrew language. The first section presents a brief history of the concept of dead language in European linguistic thought. Originating in Italy of the 15th century, the term became common in European linguistic writings during the 16th to 18th centuries as an epithet for Latin, Ancient Greek and Hebrew. During the Haskala (Jewish Enlightenment) in the 19th century it was adopted by Jewish intellectuals and was current in linguistic controversies throughout the 20th century. Sections 2 and 3 show the key role the label dead as applied to Hebrew played in wide-spread polemics on Jewish language choice in Russia during the first quarter of the 20th century (§ 2) and in the discourse about a Hebrew “revival” in Palestine at the same period (§ 3). Later works on the history of Hebrew published in the 19th and 20th centuries proposed novel conceptualizations but nevertheless followed the idea of the “deadness” of the Hebrew language of previous periods, discussed in § 4. Examples of Hebrew usage which contradict Hebrew’s functioning exclusively as a language of religion and high-level writings are provided in § 5. The last section is a humble attempt to outline a possible direction for a description of Hebrew language history, avoiding the problematic term dead language and other related terms.

The article focuses on the use of derivatives formed from the word νόμος (law) with the help of α- privativum in the Greek translation of the Bible (the Septuagint). Derivatives from the base ἀνομ- are used to translate various Hebrew words, most of which have no "legalistic" connotations in Hebrew. The article sets out a statistical analysis of the usage of these derivatives in the Septuagint and shows that in the Psalms (translated into Greek in the 2nd century BCE) the tendency towards their usage is growing in comparison with the Pentateuch – the first body of the biblical books that was translated into Greek, as early as the beginning of the 3rd century BCE. Perhaps this tendency reflects a certain development in the culture and identity of the Judeo-Hellenistic communities.

The article deals with the recent discussion in the field of the Septuagint scholarship (mainly between A. Pietersma and M. Rösel) on the meaning of the expression εἰς τὸ τέλος in the superscriptions of the Greek Psalter. In the Hebrew Psalter superscriptions like this were mostly either performance directions, or directions with instrumentation, using specific musical terminology. The Septuagint translators were obviously unfamiliar with this terminology, which resulted in a series of rather enigmatic renderings. The Fathers of the Greek church read some of the superscriptions of the Greek Psalter (including εἰς τὸ τέλος) from an eschatological perspective. Was this the meaning intended by the translators themselves? Or should we treat this eschatological interpretation as a later phenomenon irrelative to what the translators themselves thought? Analysis of how the word τέλος was used both in the Septuagint and in the literature of the Hellenistic Judaism speaks rather against the suggestion that the eschatological interpretation was intended by the translators themselves.

The article deals with the treatment of the so-called anthropomorphisms of the Hebrew Bible in the Greek translation of the Hebrew Scriptures (the Septuagint). By anthropomorphism we mean attribution of human physical form or psychological characteristics to God (e.g. speaking about God’s eyes, God’s hand, God’s repentance etc.). Within the Septuagint some scholars find a tendency to avoid anthropomorphisms, though this tendency is far from being consistent. The article summarizes the results of author’s statistical analysis of the treatment of the notion of God’s “eyes” in the Septuagint (including mentioning of God’s eyes in dead metaphors). All the books of the Hebrew Bible were scrutinized. A statistically significant tendency toward avoidance of literal translation of Hebrew expressions in question was found in the Old Greek translation of the books of Kingdoms (= Samuel and Kings of the Hebrew Bible), in as much as we can reconstruct this translation with the help of “Lucianic” manuscripts.