This book continues the encyclopedic multi-volume series “Languages of the World”, which is being prepared at the Institute of Linguistics, Russian Academy of Sciences. This is the first part of the two-volume set dealing with Semitic languages. It comprises a general survey of the Semitic language family, as well as descriptions of individual Semitic languages: Akkadian (with separate articles on Old Assyrian and Sargonic) and the Northwest Semitic languages (Ugaritic, Phoenician, Ancient and Modern Hebrew, Imperial Aramaic, Jewish Palestinian Aramaic, Classical Syriac, Classical Mandaic, Neo-Aramaic of Maalula, Turoyo, and Modern Mandaic). Also included are general surveys of Aramaic and Canaanite, as well as a summary description of Modern Northeast Aramaic. Each essay follows the typologically oriented template maintained throughout the Languages of the World series. This volume concludes with several appendices: a concise history of Northwest Semitic alphabets (with samples) and a set of maps illustrating the ancient and modern spread of the Semitic languages. This volume is intended to be both a fundamental linguistic study and a reference source. It is addressed to a wide audience of linguists from various fields, historians, cultural anthropologists, teachers and students, and anyone interested in Semitic studies. 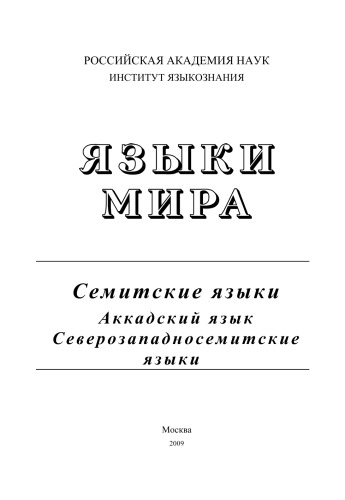