by year
Subject
News
Justice 'Ex Machina': Using Artificial Intelligence to Fight Corruption
In Mexico, a pilot project applying artificial intelligence (AI) algorithms enabled the Tax Administration Service to detect 1200 tax-evading companies and 3500 fraudulent transactions within three months – a task that would have taken 18 months using conventional methods. Despite some obvious benefits, the use of AI-based solutions to counter corruption also entails several challenges, according to experts of the HSE Laboratory for Anti-Corruption Policy (LAP) and the HSE Faculty of Law who have examined the relevant experience of several countries. A report based on the study’s* findings was presented at the XXIII Yasin (April) International Academic Conference hosted by the Higher School of Economics.
Russian Scholars Establish Correlation Between Morality and Perfectionism
Researchers from HSE University in Perm studied how different types of perfectionists see intelligence, morality, and the world around them. They found that the basis of adaptive perfectionists’ success is their perception of the world as a comprehensible place with fixed rules, while maladaptive perfectionists fail to succeed due to their focus on a rigid system of principles that they feel obliged to follow. Early correction of inflated demands on oneself can increase chances for future success. The results of the study were published in Psihologija.
Russian Scientists Create Biomimetic Algorithm to Find Epileptogenic Areas of the Brain
Researchers from the HSE University Centre for Bioelectric Interfaces have designed a new method for detecting diagnostic markers of epilepsy, called interictal spikes, using EEG and MEG. Capable of accounting for various errors and artefacts, this method constitutes a valuable addition to the arsenal of means for automatic analysis of electrophysiological recordings in epilepsy patients, especially when the data are noisy. Precise localisation of epileptogenic cortical structures can enhance the effectiveness of neurosurgical interventions. The study was published in the Journal of Neural Engineering.

Our era is closely connected with the ‘digital revolution’ that has irreversibly extended humanity’s capacity for progress. This is especially clear when one compares the digital revolution with innovations across the entirety of human history. Meanwhile, the topic of ‘barbarism’ remains on political agenda; this is a phenomenon antithetical to civilisational achievements. Barbarism is mentioned when discussing extremely aggressive inter-ethnic clashes and inter-religious conflicts and is used conceptually to signify destruction of historical and cultural monuments. Barbarism is also discussed in reference to something else: as a by-product of a contemporary civilisation that oversimplifies culture, the dissemination of ideas about the world, and the realities of humanity, and does so at the level of collective consciousness. The topic of barbarism is important for contemporary scientific agendas. Sociologists, psychologists, and ethnologists study issues relating to barbarism and try to find an explanation for its social roots, in order to better understand the nature of ethnic and religious conflicts, and the psychology behind terrorism. In this essay, we will approach barbarism from an academic point of view, as a complicated socio-cultural and political phenomenon, which has appeared across historical eras, regions, and civilisations in different ways. We examine two concepts of barbarism: the first, horizontal barbarism, which is closer to traditional interpretations of barbarism. The second is ‘vertical barbarism’ (Rathenau in Ortega y Gasset, 1929), which entails making social realities rougher, simpler, and more primitive. Whereas the first notion is related to direct clashes between different ethnic groups, religions, and civilisations, the second concept refers to complicated social processes, primarily involving powerful vertical mobility, with increasing opportunities for different groups of people to gain access to the advanced achievements of human civilisation. The contemporary era is unique: despite the massive technological progress associated with globalisation, which many argue is supposed lead to the unification and standardisation of social reality, discrepancies between social and economic patterns of life Dialogue of Civilizations Research Institute 2 remain, and different civilisations and political regimes interact with one another in complicated ways. In our research, we do not consider barbarism some sort of evil personified by ‘bad guys’, a notion that contradicts and hinders the ongoing progress of human civilisation. Such an approach might result in the illusion that barbarism can be easily eliminated. Adhering to such a fallacy must be avoided so that accurately informed decisions can be made. For the authors, barbarism, whether it is ‘horizontal’ or ‘vertical’, is a phenomenon inseparable from human civilisation’s development, and in most cases, is neither reactionary nor a ‘force of reaction’. The progress of human civilisation, while reducing the likelihood of barbarism, creates certain conditions for the its sudden appearance in unexpected and illogical circumstances. That is why the main goal of this essay is to understand the processes that lead to barbarism, and how barbarism can be weakened. We see the fight for the diminished influence of barbarism, and its consequent marginalisation, as a complicated process, based on a deep understanding of the mechanisms of barbarism’s evolution. Thus, we employ a historical approach that makes it possible to better understand the reasons for the increase in barbarous activity and helps reveal the characteristics of its evolution. The essay begins with a theoretical analysis of the phenomenon of socio-cultural and political barbarism. Then we analyse this with reference to specific historical periods,countries, and regions. 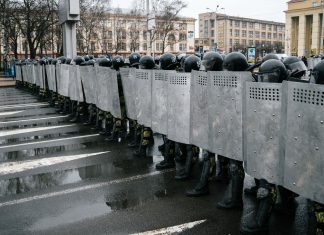