This collection of articles follows the international conference, which was held at the Institute of Europe on 29 March 2017. The first volume is devoted to the history of the EEC-EU, the current situation and possible scenarios of EU development in light of Brexit. The authors analyze global challenges, which the EU has faced in recent years: the consequences of the world economic crisis, European identity crisis, migrants’ inflow, strategic partnership with the new U.S. administration. Special attention is paid to the founding countries, above all, the Franco-German tandem: the authors reveal not only the historical contradictions that France and Germany had to overcome, but also the new problems of leadership due to the current crisis in the EU. The second part focuses upon the countries that joined the European project at a later date, candidate countries and those who still aspire to join to the European Union. 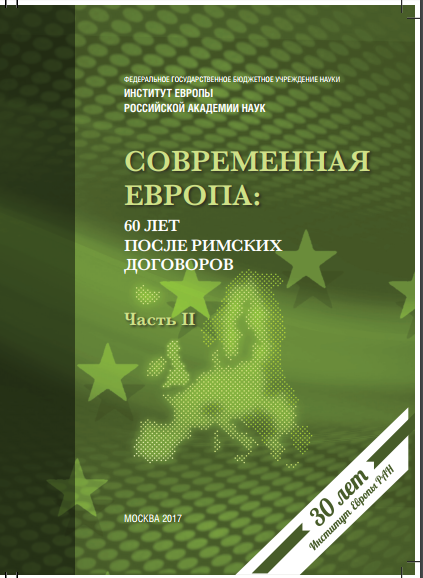 Нефтегазовый фактор в международных отношениях
Денчев К. Полития: Анализ. Хроника. Прогноз. 1999. № 3. С. 130-140.
The scope of the freedom to provide services: prohibited restrictions
Postnikova E. Law. LAW. Высшая школа экономики, 2013. No. 19.
The freedom to provide services is one of the four fundamental freedoms of the European Union (EU) internal market. Interstate trade in services is impeded by different obstacles consisting of the high level national regulation. The objective of this paper is to reveal the nature of prohibited restrictive national measures. The research is based on the analysis of the Treaty of Rome (now the Treaty on the functioning of the European Union), secondary EU law, the evolution of EU case-law, and a range of doctrinal views. It is argued that the definition of prohibited restrictions is the most complex aspect of the case-law on services. The research compares the concept of the restrictions that are to be abolished within the scope of the freedom to provide services and of other freedoms. This study also investigates the correlation between EU and World Trade Organization (WTO) legal mechanisms in the sphere of the provision of services.
Финансовые ресурсы и учреждения
Буторина О. В., Кондратьева Н. Б. В кн.: Европейская интеграция: учебник. М.: Деловая литература, 2011. Гл. 11. С. 186-202.
Месть эпохи
Сафонов А. А. Родина: российский исторический журнал. 2009. № 10. С. 123.
World Politics and Support for Terrorism within Muslim Populations: Evidence from Muslim Countries and Western Europe
Zhirkov K., Verkuyten M., Weesie J. Sociology. SOC. Высшая школа экономики, 2012. No. 08.
Focusing on the Muslim populations in five Muslim-majority countries and four Western European countries, we examine the levels of support for suicide bombings and other forms of violence. We found that support for terrorism among Muslims is present but the percentage of radicals is quite low. In both samples, support for terrorism is stronger among those who see democracy as a solely Western political system. This pattern of association is similar across the Western European countries, whereas the association varies considerably across the Muslim countries. The perceived economic dominance of the West is related to more support for terrorism among Muslims in Europe. In the Muslim countries, blaming the West for negative international relations is associated with greater support for terrorism. We suggest that improvement of the relationships between the West and the Muslim world can reduce support for terrorism and prevent radicalization within Muslim societies.
«Духовное» и «политическое» «ядра» «локальной цивилизации» и их столкновение в истории России
Липкин А. И. Научные доклады Лаборатории сравнительного анализа развития постсоциалистических обществ. WP17. Высшая школа экономики, 2012. № 01.
Экологические причины албано-славянских этнических конфликтов
Сафонов А. А. В кн.: Материалы докладов XV Международной конференции студентов, аспирантов и молодых ученых "Ломоносов". Секция "Филология". М.: МАКС Пресс, 2008.
Региональная модель формирования информационного общества (на примере Содружества Независимых Государств)
Плотников В. А. Евразийская интеграция: экономика, право, политика. 2012. № 11. С. 138-143.