From a practical perspective, any fiscal system used in the world falls into either of the two major categories: concessions (also widely known as a royalty + taxes or R + T) and contracts (also referred to as production sharing agreements or PSA).

Each system has multiple types and variations, and some of them use their own specific terminology as a result of certain conceptual, historical, and geographic variances. However, the difference in concepts boils down merely to a difference in the choice of words to describe very similar economic processes. Their most significant differences could be tracked in the legal sphere because the acquisition of ownership right by mineral producers to their mineral production is a highly indicative factor. However, from the economic perspective, specifically, in terms of cash flow generation associated with each individual system, those differences appear noncritical. Below follows a flowchart of basic equations in a typical R + T tax system. ... 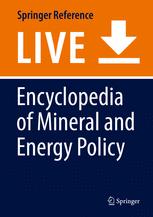 National and corporate policymakers view energy security strategies through the lens of mainstream concepts and definitions offered by research and policy discourse. The central elements of the classical energy security concepts are based on the premises of sufficient and reliable supply of fossil fuels at affordable prices in centralized supply systems. However, these approaches offered by neorealism, neoliberalism, constructivism, and international political economy are outdated. They rarely take account of the latest changes in the energy industry and society. The chapter examines the classic energy security concepts and assesses to what extent changes in the energy industry are taken into consideration. This is done through integrative literature review, comparative analysis, identification of ‘international relations’ and ‘energy’ research discourse with the use of big data, and country case studies. The chapter offers suggestions for revision of energy security concepts through integration of future technology considerations, new energy sources, new actors and the interrelation among them, the specific features of the developing and least developed countries and their energy relations with the wealthy states. Moreover, the differences in International Relations and Energy researchers’ discourse of energy security are outlined together with a rationale for the interdisciplinary approach to energy security, combining the natural and social sciences ideas and tools. The findings are illustrated with case studies of energy security policymaking in selected countries.

Purpose – The purpose of the study is to show the technical potentials of a variety of renewable energy sources in Russia, as well as benefits from their deployment including hydrocarbon savings, emission reduction and lower energy cost. Design/methodology/approach – In the paper, Russia is compared with other countries in terms of actual installed capacity and its dynamics, actual and projected share of renewables in the energy mix. The authors offer calculations of the technical potentials (fuel, heat energy, electrical energy, resource saving and environmental) of renewables (solar PV, wind, biomass, geothermal, low-grade heat, small hydro), identify social and economic preconditions and key effects of their deployment. Findings – The paper features calculations on the renewable energy technology potential, based on the data by Andreenko et al. (2015), authors’ calculations and statistical data. This study proves that the cumulative technical potential of the renewables in Russia amounts to 133,935 million units of oil equivalent. This study also offers assessments of oil fuel, black coal and natural gas savings that may be achieved by replacing fossil fuels with renewables; assessments of avoided air pollution calculated as CO- and CO2-equivalents. Originality/value – The paper fills in the gap of comprehensive assessments of renewable energy potentials in Russia and a variety of effects that their deployment may entail, based on a single integral methodology. The authors offer a new evaluation of existing and future renewable energy potentials, overcoming the methodological and data constraints faced by previous similar studies. The up-to-date, comprehensive and accurate data will help make the right investment and policy choices.

This collection of essays from leading energy, strategic, and economic policy think tanks focused on how energy relations are forming in the 21st century offers energy scholars and policy makers answers to what these increasingly close relationships mean for international politics and trade.

After analyzing the characteristics and pricing models on the Russian wholesale electricity market, some important features for econometric modeling are introduced. This paper suggests econometric forecasting models developed to predict daily and hourly electricity prices on the day-ahead market for two price zones in Russia: European and Siberian ones. A set of 24 models, which are similar in nature but different in included regressors, are introduced. On the basis of the actual database for 2014, different modifications of price formation are offered and analyzed with the help of the Eviews econometric package. Dynamic forecasts on various distances (day, week, and month) are conducted and the most suitable models from the point of minimizing the norms of the vectors residuals are chosen. Constructed ARMA models have high predictive power and are able to reflect the price trend on the base of exogenous factors and the previous price values.

Studies rarely focus on the double interplay between the innovation potential of a company, its business model and the structure of the market faced by the company. This interplay is especially important to Russian companies working in various industries of the energy sector. Multiple initiatives launched by the Russian authorities have been intended to foster innovation in technological sectors of the Russian economy. These initiatives are often based on one or another preconceived notion of a fundamental structural framework expected to produce the best result. Focus on mergers and acquisitions is a major part of this framework in both public and private organizations. This chapter shows that mergers and acquisitions per se have little influence on innovation potential of the resulting organization. Vice versa, a proper strategy based on the clear-cut competitive advantage and the specialization corresponding to this advantage is more productive way to foster innovation in an energy company. Such a specialization can be later followed by a series of mergers and acquisition. But if this initial step has been ignored or neglected, the subsequent mergers cannot start corporate innovation. This thesis is illustrated with three cases (Eurasia Drilling Company or EDC, TGT and Rosgeologiya) described below.

The comparative analysis presents the first comparative study of the government procurement of French and Russian petroleum products with an in-depth  review of foreign legal sources and national policy instruments. Based on the findings, this research led to the conclusion that public procurement of hydrocarbons is an extremely sensitive matter in the geopolitical, political and institutional sense. Despite some similarities in the general concept of French and Russian legislation in public procurement, the analysis revealed a substantial difference in the implementation of public procurement policies. Russia is characterized by a predominance of electronic auctions where the evaluation is based solely on the price whereas France uses a wide variety of different criteria to evaluate procurement offers.