This volume consists of a collection of essays devoted to study of the most recent educational reform in Russia. Large-scale changes have been effected in finance, structure, governance and curricula. At the same time, there has been a renewed and widespread appreciation for the positive aspects of the Soviet legacy in schooling. The essays presented here compare current educational reform to reforms of the past, analyze it in a broader cultural, political and social context, and study the shifts that have occurred at the different levels of schooling from political decision-making and changes in school administration to the rewriting textbooks and teachers' everyday problems. The authors are Russian educators, who have played a leading role in implementation of the reform, and Western scholars, who have been studying it from its very early stages. Together, they formulate an intricate but cohesive picture, which is in keeping with the complex nature of the reform itself. 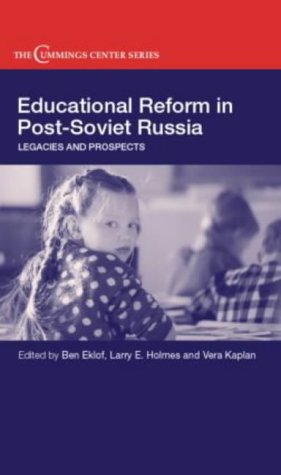 The development of our national High school can be called “permanent reform era”: the content and meaning of these reforms are not always obvious, but results are often deplorable. Author of articles talks about the perception of the faculty in process reforms, especially attention was focused on differences between two generations: “We” and “Me”.

In this paper, we try to unravel some of the unintended and intended academic effects associated with post-Soviet educational reforms by focusing on three cases: Estonia, Latvia and Russia. We have chosen this comparison because a unique ‘natural experiment’ in the three countries allows us to compare the changing academic performance on an international test of a largely similar population in the three countries—Russian origin students attending Russian-medium schools—subjected to three variations of post-Soviet reforms. We find that relative to students in Russia, Russian-medium students in the Baltics made significant gains in the Programme for International Student Assessment (PISA) test. In Latvia, these appear to be an unintended effect of somewhat ‘softened’ state language policies, the conditions surrounding minority rights, and the general context of maintaining social cohesion. In Estonia, the (later) relative gains of Russian students appear to an intended effect of locally grown educational (and language) policies and increased, more effective cooperation with Russian medium schools to further improve PISA performance in a relatively high scoring, PISA-focused country.

This is an analysis of social and professional characteristics, as well as value orientations of a modern educational innovator. The survey included participants of the 2014 Contest of Innovations in Education, with the sample of 304 respondents. Value orientations were revealed with the help of a questionnaire based on the Schwartz’s value theory. The results were compared to those of the European Social Survey of the Russian population conducted in 2012. Answers of the Contest participants differed dramatically from those of an average Russian, both in subjective importance of specific value orientations and in the structure of value orientation hierarchy. Innovators appreciated more often the values of self-sufficiency, kindness and universalism, as well as willingness to take risks in their professional life. They were less guided in their actions by the desire to take and to hold power which was not associated with their personal achievements. The survey demonstrated that innovations in education could be offered and implemented not only by experts, i.e. people working in educational institutions of different levels, but also by employees of companies that are not directly related to education, as well as by school and university students. Innovators have a better educational background and participate actively in supplementary education events.