The book is an introduction to the qualitative theory of dynamical systems on manifolds of low dimension (on the circle and on surfaces). Along with classical results, it reflects the most significant achevements in this area obtained in recent times. The reader of this book need to be familiar only with basic courses in differential equations and smooth manifolds. 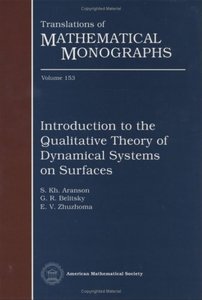 Similar publications
Morrison-Kawamata cone conjecture for hyperkahler manifolds
Ekaterina Amerik, Misha Verbitsky. arxiv.org. math. Cornell University, 2014
Let $M$ be a simple holomorphically symplectic manifold, that is, a simply connected holomorphically symplectic manifold of Kahler type with $h^{2,0}=1$. We prove that the group of holomorphic automorphisms of $M$ acts on the set of faces of its Kahler cone with finitely many orbits. This is a version of the Morrison-Kawamata cone conjecture for hyperkahler manifolds. The proof is based on the following observation, proven with ergodic theory. Let $M$ be a complete Riemannian orbifold of dimension at least three, constant negative curvature and finite volume, and $\{S_i\}$ an infinite set of locally geodesic hypersurfaces. Then the union of $S_i$ is dense in $M$.
Complementary components to the cubic Principal Hyperbolic Domain
Blokh A., Oversteegen L., Ptacek R. et al. arxiv.org. math. Cornell University, 2014
We study the closure of the cubic Principal Hyperbolic Domain and its intersection $\mathcal{P}_\lambda$ with the slice $\mathcal{F}_\lambda$ of the space of all cubic polynomials with fixed point $0$ defined by the multiplier $\lambda$ at $0$. We show that any bounded domain $\mathcal{W}$ of $\mathcal{F}_\lambda\setminus\mathcal{P}_\lambda$ consists of $J$-stable polynomials $f$ with connected Julia sets $J(f)$ and is either of \emph{Siegel capture} type (then $f\in \mathcal{W}$ has an invariant Siegel domain $U$ around $0$ and another Fatou domain $V$ such that $f|_V$ is two-to-one and $f^k(V)=U$ for some $k>0$) or of \emph{queer} type (then at least one critical point of $f\in \mathcal{W}$ belongs to $J(f)$, the set $J(f)$ has positive Lebesgue measure, and carries an invariant line field).
A paradigm for codimension one foliations
Dmitry Filimonov, Kleptsyn V., Navas A. et al. In bk.: Advanced Studies in Pure Mathematics. Vol. 72: Geometry, Dynamics, and Foliations 2013: In Honor of Steven Hurder and Takashi Tsuboi on the Occasion of Their 60th Birthdays. Mathematical Society of Japan, 2017. P. 59-69.

We summarize some of the recent works, devoted to the study of one-dimensional (pseudo)group actions and codimension one foliations. We state a conjectural alternative for such actions (generalizing the already obtained results) and describe the properties in both alternative cases. We also discuss the generalizations for holomorphic one-dimensional actions. Finally, we state some open questions that seem to be already within the reach.

Nonlinear differential dynamic model of the relation between the branches of production was proposed. Mathematically, this model is expressed as a system of first-order ODE. Dynamic variables of the model – the value of the output of each branch of production. Each differential equation of the system includes independent growth and diminution of finished goods; growth and decline of production related to the production of allied industries. Two models were proposed: a model with Malthusian products growth (model with no restrictions on the amount of product), the model with the Verhulst limiting of the growth of output. The equilibrium points of dynamical systems, system stability were determined as well as the qualitative analysis of dynamic systems was made.

The volume is dedicated to Stephen Smale on the occasion of his 80th birthday. Besides his startling 1960 result of the proof of the Poincaré conjecture for all dimensions greater than or equal to five, Smale’s ground breaking contributions in various fields in Mathematics have marked the second part of the 20th century and beyond. Stephen Smale has done pioneering work in differential topology, global analysis, dynamical systems, nonlinear functional analysis, numerical analysis, theory of computation and machine learning as well as applications in the physical and biological sciences and economics. In sum, Stephen Smale has manifestly broken the barriers among the different fields of mathematics and dispelled some remaining prejudices. He is indeed a universal mathematician. Smale has been honored with several prizes and honorary degrees including, among others, the Fields Medal(1966), The Veblen Prize (1966), the National Medal of Science (1996) and theWolf Prize (2006/2007).

The article is devoted to a particular case of Ivrǐ's conjecture on periodic orbits of billiards. The general conjecture states that the set of periodic orbits of the billiard in a domain with smooth boundary in the Euclidean space has measure zero. In this article we prove that for any domain with piecewise C 4-smooth boundary in the plane the set of quadrilateral trajectories of the corresponding billiard has measure zero.

In this work, we describe approaches to creation of a ranked jobs framework within the model of cycle scheduling in Grid virtual organizations with such quality of service (QoS) indicators as an average job execution time and a number of required scheduling cycles. Two methods for job selection and scheduling are proposed and compared: the first one is based on the knapsack problem solution, while the second one introduces a heuristic parameter of job and computational resources “compatibility”. Along with these methods we present experimental results demonstrating the efficiency of proposed approaches and compare them with random job selection.