Privatization and Transition in Russia in the Early 1990s

Few economic events have caused such controversy as the privatization process in Russia. Some see it as the foundation of political and economic freedom. For others it was economics gone wrong, and ended in "Russians stealing money from their own country". As Russia reasserts itself, and its new brand of capitalism, it is ever more important that policy makers and scholars understand the roots of the economic structure and governance of that country; what was decided, who made the decisions and why, what actually transpired, and what implications this has for the future of Russia.

This work, written by two senior advisors to the Russian government, has unique access to documentation, tracking the decision making process in the Russian Mass Privatization process. By close reference to events, and supplemented by interviews with many of the key participants, it shows that the policies adopted were often influenced and shaped by different forces than those cited by current popular accounts. The book challenges the interpretation of Russian privatization by some of the West’s most eminent economists. It underlines that economists of all schools, who bring assumptions from the West to the analysis of Russia, may reach false or misleading conclusions. It is an essential guide for anyone interested in Russian economic reform, and anyone who seeks to understand this enigmatic country, and its actions today. 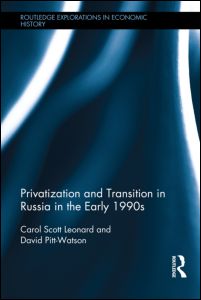