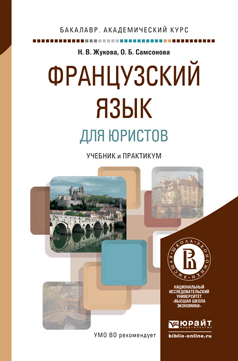 The textbook is designed for students of educational institutions of secondary vocational education, enrolled in the legal areas and specialties, French-speaking on the B1-B2 level, in accordance with the Common European Framework of Reference for Languages. It can be used as a base for the development of the course "French for professional purposes ". The purpose of the textbook is specialist training, in French-speaking volume, which will allow in the future: search and analysis of foreign sources of information; communicate in situations of universal and professional character. The textbook will be of interest to those who are preparing to pass a qualifying examination in French legal language for the award of Chamber of Commerce of Paris (DFP juridique B2), as well as all students of the French language

This study addresses the representation of the linguistic and cultural type “immigrant” in French and Russian media discourse. Linguistic analysis of selected sources shows, on the one hand, signs of tolerance towards immigrants and, on the other hand, evidence of rejecting immigrants, which demonstrates the ambiguity of the matter and indirectly provokes conflicts. Visual composition analysis complements these results by revealing the following: the purpose of immigration – employment – is often socially rejected; immigrants’ sense of community is a specific cultural code in a host culture; and the cultural transfer of an “immigrant” into a different space creates uncertainty or ambiguity.

The paper sums up the results of the comparative analysis of youth slang words in Slavic, Germanic and Romance languages, the language data are taken from Russian, German and French youth´s speech with several examples from English and Spanish. There are defined some common features in vocabulary enrichment (word-building, metaphorization, borrowing) and functioning of these phenomena. The conclusions are illustrated with concrete examples from lexicographical sources of the 21st century.

This article presents a detailed analysis of the nuances and niceties of a third generation textbook. It highlights the principal differences between the textbook under consideration and the textbooks of the previous generations. The article dwells on the methodological principles that form the basis of the third generation. The textbook "French for lawyers" is an example of these principles’ realization. The article analyses the textbook’s structure and the exercises used for all speaking activities types. It embarrasses a widely presented authentic and relevant material.

The book includes authentic texts from French media and Intrenet sites accompanied by a set of questions, exercises and tests. Many of them are based on french and russian placement examination tasks.

Развитие современного информационного пространства: анализ и перспективы
Дзялошинский И. М., Пильгун М. А., Тощева А. В. и др. Вып. 11. М.: АПК и ППРО, 2012.
The Legitimacy of the Bolshevik Order, 1917-1918: Language Usage in Revolutionary Russian Law
Borisova T. Y. Law. LAW. Высшая школа экономики, 2012. No. 05.
The article describes and analyzes the legislative politics of revolutionary regimes in Russia in 1917-1918. The author aims to demonstrate the political meaning of the form of early Soviet legislation and its legitimizing effect. The revolutionary legislators often used specific language in the new laws as a vehicle of legitimacy, i.e. to make the people comply. The two main types of legal language used by the Bolsheviks can be interpreted from the perspective of different types of legitimacy. The revolutionary strategy used propagandistic legislation, written in the language of lay people, which urged them to act according to the new law. It can be seen as a request for acts of the people to legitimize the soviets. On the contrary, the traditional strategy employed old bureaucratic means of writing and distributing legislation to the local soviets. The language used by this strategy was closed to the understanding of a lay audience and implied traditions of obeying the law written in familiar legal language, which in turn implied rational/legal legitimacy. The second strategy had already become dominant after the first months of the Bolshevik revolution. This observation demonstrates that from the very beginning of their rule, Soviet leaders approached legislative policy from a technocratic point of view, which determined the further development of Soviet legal theory and practice.
Эффективные стратегии и тактики в современных коммуникационных процессах
Edited by: М. А. Пильгун Вып. 10. М.: АПК и ППРО, 2012.
Наблюдения над палеографией византийских надписей Северного Причерноморья
Виноградов А. Ю. Вестник древней истории. 2012. № 1. С. 182-195.
Abelian automorphism groups of cubic fourfolds
Mayanskiy E. arxiv.org. math. Cornell University, 2013. No. 5150.
We list all finite abelian groups which act effectively on smooth cubic fourfolds.
Этические проблемы организационной, профессиональной и межличностной коммуникации
Edited by: М. А. Пильгун Вып. 12. М.: АПК и ППРО, 2012.
Таможенно-тарифные правоотношения в таможенном союзе ЕврАзЭС
Пащенко А. В., Хрешкова В. В. Реформы и право. 2012. № 1. С. 15-22.
Russian Competition law in light of the principles of ex post and ex ante
Totyev K. Y. Law. LAW. Высшая школа экономики, 2014
This article is devoted to the legitimation and application of the standards of ex post and ex ante by courts and the executive authorities in the sphere of competition regulation. The postulates of ex post and ex ante are considered as legal principles. The principle of ex post is intended solely for judicial and administrative application; it has a deontological framework; it assumes that the legality of the activity of economic entities is assessed only on the basis of positive legal criteria in terms of the subjective rights violated; it is limited to a particular case. The traditional approach to the principle of ex post limits the scope of its application on the subjects and excessively expands its objects. The postulate of ex ante has a utilitarian basis which assumes the assessment of the application of relevant rules in the future. One of the main aims of the article is to refute the common view of lawyers and economists that a legislator applies principle of ex ante not being bound by principle of ex post, while it is the other way around for the courts and the executive authorities. The principle of ex ante may be applied not only in the process of the creation of new rules but also at the application stage for existing rules on economic competition. This is justified because the arguments of the courts and the executive authorities about a refusal to take into account the consequences of a decision in a particular case are not convincing.
Анализ предложений по надзору за деятельностью финансовых конгломератов
Пеникас Г. И., Малков Е. С. Банковское дело. 2012. № 5. С. 30-32.