During World War II at least 13.5 million people were employed as forced labourers in Germany and across the territories occupied by the German Reich. Most came from Russia, Ukraine, Belarus, Moldavia, the Baltic countries, France, Poland and Italy. Among them were 8.4 million civilians working for private companies and public agencies in industry, administration and agriculture. In addition, there were 4.6 million prisoners of war and 1.7 million concentration camp prisoners who were either subjected to forced labour in concentration or similar camps or were 'rented out' or sold by the SS. While there are numerous publications on forced labour in National Socialist Germany during World War II, this publication combines a historical account of events with the biographies and memories of former forced labourers from twenty-seven countries, offering a comparative international perspective.Alexander von Plato is a historian and the former Director of the Institute for History and Biography at the University of Hagen (Germany). He has been a Visiting Professor at the University of Vienna, the Director of the International Life Story Project on Forced Labourers during WW II, and the Secretary of the International Oral History Association. His many publications include books and films on mentality history, focusing particularly on National Socialism, World War II, and German reunification.

Almut Leh is a historian and Research Fellow at the Institute for History and Biography at the University of Hagen (Germany) and co-editor of BIOS -Zeitschrift f r Biographieforschung, Oral History und Lebensverlaufsanalysen. She also is a council member of the International Oral History Association and has published on German history since 1945 and the methodology of oral history.

Christoph Thonfeld is a historian and language teacher and is currently Assistant Professor of German language and culture at Cheng Chi University in Taipei, Taiwan. He is also researching forced labourers' memories of WW II in an internationally comparative perspective. He is co-editor of the periodical WerkstattGeschichte. 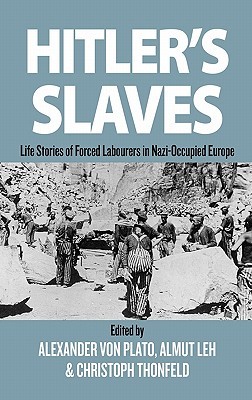